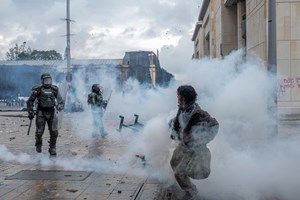 CIMAM - International Committee for Museums and Collections of Modern Art – have openly lent their support to Colombian cultural workers in their stance against repression by the Columbian State.

"Our struggle is for life". (Colectivo Dexpierte)

The community of artists, curators, managers, designers, photographers, teachers, mediators, and exhibition producers that make up the field of art stands in solidarity with the victims, their families, and citizens in general who have suffered the violent actions of repression of the right to protest by the Colombian State, as well as reject the stigmatization, discrimination, and censorship practiced in the context of the Paro Nacional (National Strike). We also reject the violent acts carried out by anonymous armed groups that give continuity to the historical violence exercised against ethnic and gender minorities expressed in femicides, in murders of social leaders, environmentalists, labor leaders, and union organizations, in attacks on indigenous peoples, and human rights defenders, and in the persecution of young people, students, and workers.

The pandemic crisis of COVID-19 evidenced the reality of an artistic sector characterized by labor precariousness, instrumentalization, and the absence of representation and real recognition by the State.

As a sector, we demand that the State guarantees respect for the different social manifestations. We artists demand the fundamental right of respect for life itself. We reiterate our support to the Comité del Paro Nacional Colombiano (Colombian National Strike Committee) and its demands, as we demand respect for democracy, solidarity with the victims and their families, and the total rejection of violence in all its manifestations. NO to impunity, NO to censorship opposed to the spirit of freedom of expression.