In Conversation with Pom Harrington on One Hundred Seconds to Midnight 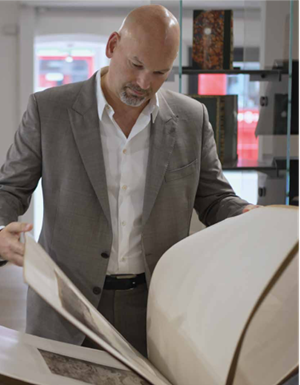 Etienne Verbist interviews Pom Harrington on an exhibition at Frieze Masters titled One Hundred Seconds to Midnight presenting a collection of original works charting the history of climate change by the world’s greatest scientists, writers, and activists.

ETIENNE VERBIST: Why did you choose for Frieze Masters the title ONE HUNDRED SECONDS TO MIDNIGHT?

POM HARRINGTON:Our exhibition at Frieze Masters this year is centred around a landmark and unparalleled collection of original works charting the history of climate change by the world’s greatest scientists, writers, and activists. Drawing a line from Aristotle to Attenborough, One Hundred Seconds to Midnight – Sounding the Alarm for Climate Change documents the key works, concepts, and the first usage of terminology such as “the greenhouse effect” and “global warming” that have shaped our understanding of the modern environmental movement.

ETIENNE VERBIST: How will you support your idea?

POM HARRINGTON: Peter Harrington will be donating a portion of the proceeds of the sale of this landmark collection to the leading international conservation charity, the World Land Trust, supporting its remarkable efforts to protect the world’s most biologically significant and threatened habitats and wildlife.

ETIENNE VERBIST: What did you show at Frieze Masters?

POM HARRINGTON: Alongside the collection, our wider Frieze Masters catalogue also brings together a selection of exceptional rare books and manuscripts -- many of which also reflect ecological and environmental concerns

ETIENNE VERBIST: Can you highlight some of the works you show at Frieze Masters in addition to the One Hundred Seconds to Midnight collection?

POM HARRINGTON : We show a complete set of Cook’s three Pacific voyages which includes his attempt to discover the north-west passage, a sea route that at the time was permanently ice-logged but has now become easily accessible due to rising temperatures, in a dramatic indicator of our current crisis, while Darwin’s contribution to the Narrative of the Surveying Voyages of His Majesty’s Ships Adventure and Beagle is not only the genesis of the Origin of Species, but also contains valuable notes on coral reef formation. Contributing to a classical understanding of geography and an early linking of man’s impact on the environment and climate are works such
as Ptolemy’s Cosmographia, Pliny’s Historia naturalis, and Strabo
De situ orbis. Recent academic work has reflected on the way in which Shakespeare’s works, offered here in a Fourth Folio, respond to the impact of 16th-century population growth, nascent deforestation, and human exploitation on delicate ecosystems.

ETIENNE VERBIST: Do you have work related to the industrial revolution and their consequences on climate change?

POM HARRINGTON: Absolutely ,the industrial revolution kick-started global warming as we know it today. Malthus’s hugely influential Essay on the Principle of Population reflects early concerns on how increasing the human population will inevitably strip the planet of its resources. Dickens’s opening chapter in Bleak House reflects the pollution of urban living caused by industrialization: “Fog everywhere. Fog up the river, where it flows among green aits and meadows; fog down the river, where it rolls defiled among the tiers of shipping and the waterside pollutions of a great (and dirty) city”.

In a rejection of the smog and sweeping industrialization of the Victorian era, William Morris, one of the leaders of the Arts and Crafts movement, founded the Kelmscott Press: the pinnacle of his achievement, the Kelmscott Chaucer, was a masterpiece of printing and book production. Just a few years after its printing, a set of photographic glass plates of the moon were captured during the first large-scale photographic survey of the moon by the Observatoire de Paris – a rare and fragile survival of this early lunar exploration.

Increases in global temperature caused by climate change will put stress on our water resources. A key development in the modernization of Saudi Arabia, a water-poor country, was a major engineering project in 1947, upgrading the water supply to Jeddah to improve water security for the Hajj.