‘If a mind occupies the body and the body occupies a building..." An interview with Antony Gormley 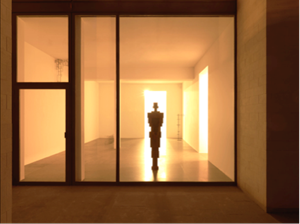 Anthony Gormley is a British sculptor. He is currently living and working in London and has received an OBE for his contributions to the art world. His best known work includes The Angel of the North, a large-scale sculpture erected outside Gateshead in the North of England. His recent exhibition ‘LIVING ROOM’ was shown at the Xavier Hufkens gallery in Brussels.

Anthony Gormley is a British sculptor. He is currently living and working in London and has received an OBE for his contributions to the art world. His best known work includes The Angel of the North, a large-scale sculpture erected outside Gateshead in the North of England. His recent exhibition ‘LIVING ROOM’ was shown at the Xavier Hufkens gallery in Brussels.

The recent work of Antony Gormley, hand crafted with industrial precision like a perfect gun in carbon steel, created a spiritual cluster bomb in my mind.

The man is religious in that sense for me. He belongs to the restricted family of those in quest of spirituality, those who expand our vision toward the far borders of the universe.

He is questioning our metaphysical geometry and awakens the extra-territorial spatiality of our own bodies.

He poetizes the density of the void between our own atoms and de-structures the academic architecture of our flesh, while at the same time blowing life into it.

Thirty years since his first solo exhibition with Xavier Hufkens, Antony Gormley asks: ‘if a mind occupies the body and the body occupies a building, how does it feel if we substitute building for body? To what degree are we sheltered and contained by our structures and to what extent are we controlled by them?’

His first work reminded me of the Rolling Stones song ‘Gimme shelter’:

Oh, a storm is threat'ning
My very life today
If I don't get some shelter
Oh yeah, I'm gonna fade away

War, children, it's just a shot away

Rape, murder!
It's just a shot away

In ‘LIVING ROOM’ we see his spiritual journey. It gave me the same feeling as the St Matthew Passion from Johann Sebastian Bach.

The exhibition borrows its title from LIVING ROOM, the new two-part sculpture around which the exhibition centers.

As is typical of Gormley’s oeuvre, this installation departs from a concrete and tangible given: the artist’s own body.

Working from three-dimensional scans, the resulting figures have been reduced to a series of interpenetrating cell-like structures, some of which are solid, others of which are open.

The formation of LIVING ROOM calls to mind, in both plan and elevation, any number of utopian buildings. Whereas the work resembles a three-dimensional architectural model when viewed from the side, an altogether different view can be gained from the upper floor of the double-height gallery space. From here, the work is not dissimilar to an aerial view, or ground plan, of a modernist housing ensemble. This lofty vantage point is also the ideal position from which to study the perfect symmetry of the two forms and the subtle but corresponding differences in negative and positive space.

This key work alludes, both literally and figuratively, to the notion of the ‘house’, which is articulated here as a man-made construction and shelter, without which we would ultimately perish, but also as the bodily ‘shell’ that protects something infinitely more remote and enigmatic: the cerebral inner ‘space’ where thought and emotion reside.

In his exploration of the points of contact between these two spheres, the work bears witness to Gormley’s on-going investigation of geometry, abstraction and our metaphysical relationship to the built environment. Through materials, gesture and spatial relationships, the artist strives to give form to that which is least visible and most profound: the sensation of occupying a body that, in turn, inhabits the world.

The visual language of LIVING ROOMis also evident in the seven freestanding ‘open blockwork’ sculptures on view. Described by Gormley as ‘conflating the body that occupies space with the vessels that contain it’, these works are a further iteration on the theme of interiority and exteriority, and the notion of a vessel (body) within a vessel (building) – and vice versa. But just as our physical and emotional states alter, so too do the figures, with the open and closed surfaces supplying different degrees of transparency or opacity.

In this exhibition, the abstracted human figures can be heavy and solid (as in the cast iron pieces) or tenuous and insubstantial to the point they seem to disappear into the surrounding space. As we circulate these nuanced beings, they invite us to enjoy the interplay of mass to void, dark to light, and open to closed.

The blockwork figures are complemented by recent linear sculptures in square-section stainless-steel bar. Collectively known as ‘framers’ and ‘liners’, the artist describes these works as the ‘objective mappings of subjective space’.

Either freestanding or suspended, they structure and energize the intimate and domestic spaces of the gallery.

Permeating the exhibition is the language of modernity, most notably De Stijl and American minimalism, which is here harnessed to evoke pathos. Gormley’s work can thus be viewed as a continuation of this abstract tradition in the sense that his geometric constructions and sculptural voids eschew illustration and mimesis while allowing an open ground for projection and reflection.

During an interview at Bozar, Antony Gormley gave some insight into his work:

Etienne Verbist: How do you connect to the material world? How do you put things into words?

Antony Gormley: Pay greater attention to what I make, not to what I say. Sculpture is about material.

EVB: What about your early work? Looking at the materials you use (the body, the clothes, the body in the bed or in the room, the human life, our existence) what is the significance of body to you?

AG: I refer to the space of a body, the use of our body as a tool, as material. It is very fragile. I feel like a farmer putting up stones - a gesture in time, which I can compare with a discovery in Malta, a temple built in the form of body, an example of body, a dialogue with things, time and memory, architecture, space.

I am exploring the role of architecture to create the habitats of the future. Eighty percent of the world’s population will live in urban environments. The will transform the way we live, moving from nature to a designed world. Space will become a medium, another side of appearance.

The habitat, the clothes as second skin, the buildings we live in, the cities we live in – all synchronised and depending. They all become an extension, a syntax of architecture.

EVB: What about claustrophobia? How do you deal with the panic and the need to escape?

AG: You need to go inside and accept your vehicle - your body with its own agenda.

Your body is NOT your body, it is just a body with micro-cosmos living in a macro-cosmos.

The greatest adventure of mankind is the mystery of being a body in a connected world.

EVB: What developments have you seen in the art world?

AG: An Ismes Is not a development. It is stylish, like a mask. It is a need to conform like images in advertising - a seeking for self-representation. A sculpture is a way of side-stepping.

EVB: How would you react to the hyper-complex and fast changing world? Do you see a link with Artificial Intelligence and the Internet of Things?

AG: I am not into the digital world.

EVB: Why are you an artist?

AG: I am trying to be an artist because I cannot be anything else.

Professor Mark Coeckelbergh offered his reflections on the theme: Our vulnerability depends not only on our body, but also on the technological shells and structures we build. But body and tech/architecture are connected. Our existence is interdependent. Mind and body are more merged, or at least one could use the term dwelling, which connects again to architecture.

There is a question here about control and I think it’s an important one. In my field this means that with information technology we built structures and infrastructures to protect us, but they also control us. This increase as we see a rise in the use of IoT (Internet of Things) and AI (Artificial Intelligence). There are always two sides to these developments: protection and control. We cannot have it easy, we cannot have only one side. It is not all about control, or perhaps control also means we are made into subjects by our techniques and technologies. The architectures we shape for our protection also shape us.

On the topic of absolute isolation versus communication:

Communication, eye contact versus people looking in a train out of a window, body as a lost object.
We can own nothing.
The body as a place.
We know ourselves via the relationship to others.
The collective body.
Antony Gormley (b.1950, London) was awarded the Turner Prize in 1994,
the South Bank Prize for Visual Art in 1999, the Bernhard Heiliger Award for Sculpture in 2007, the Obayashi Prize in 2012 and the Praemium Imperiale in 2013. His work has been exhibited all over the world, most recently in Object at the National Portrait Gallery in London (2016-2017); Event Horizon in Hong Kong (2015-2016); Land in various Landmark Trust properties in the UK (2015-2016); Human in Forte Di Belvedere, Florence, Italy (2015); Another Time in Mardalsfossen, Norway (2015); Sculpture 21st: Antony Gormley in Lehmbruck Museum, Duisburg, Germany (2014-2015); Expansion Field at Zentrum Paul Klee in Bern, Switzerland (2014); Firmament And Other Forms at the Middelheim Museum in Antwerp, Belgium (2013).
By Etienne Verbist
Etienne Verbist is an authority in the field of crowd sourcing, disruptive business modelling and disruptive art. After a well filled career with companies such as GE, Etienne was an early adopter of crowd sourcing. Etienne is manager Europe and Africa for Crowd Sourcing Week, a board advisor to a broad range of companies on innovation and new technology, curator of the Disruptive Art Museum – the smallest museum in the world – and columnist for ArtDependence Magazine.