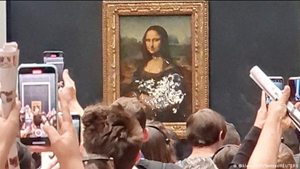 The world’s most famous painting, Leonardo Da Vinci’s painting La Gioconda, also called the Mona Lisa, suffered what appears to be a cake attack on Sunday by a visitor to the Louvre Museum.

The world’s most famous painting, Leonardo Da Vinci’s painting La Gioconda, also called the Mona Lisa, suffered what appears to be a cake attack on Sunday by a visitor to the Louvre Museum.

Those who witnessed the moment said on social media that the police authorities acted promptly, expelling the author of the attack. “Very heavy to have witnessed this,” said Twitter user Lis Grimaldi (@Lis_grimaldi), who in her profile posted a video of the scene, shortly after the attack.

According to user @Aluferathul, there are even more surprises about the act: “It was a man, who was in a wheelchair with a wig, who got up from his chair very determined and threw the pie,” he said. The information has not yet been confirmed by the museum. The work was not damaged, as the pie collided with the glass that protects the painting.