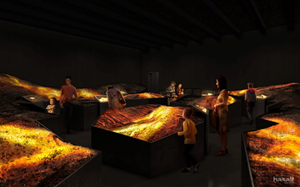 The ‘largest volcano and earthquake exhibition in Europe’ is due to open June 1st in Hvolsvöllur in South Iceland. LAVA is dedicated to the country’s volcanic landscape and will explore the geographic makeup of the local area through a series of interactive exhibits and educational activities.

The ‘largest volcano and earthquake exhibition in Europe’ is due to open June 1st in Hvolsvöllur in South Iceland. LAVA is dedicated to the country’s volcanic landscape and will explore the geographic makeup of the local area through a series of interactive exhibits and educational activities.

“The centre will show the creation of Iceland and various other information on the geology of the area,” said Ásbjörn Björgvinsson, Marketing Director at the LAVA Centre. “The idea came during the Eyjafjallajökull eruption. We felt there was a need for a full size educational information centre on Iceland geology and the volcanoes of Iceland.”

Visitors to the centre will be able to view a variety of artefacts, films and images from the various eruptions that have occurred in the country over the last century. The Centre will also form the main entry point for Iceland’s new Katla Geopark, a UNESCO site aimed at preserving the natural environment and promoting nature tourism in the region.

The building has been designed by Basalt Architects from Reykjavik. The firm are founding members of the Icelandic Green Building Council and the Lava Centre has been designed with sustainability in mind. Inside the exhibition centre, Basalt worked alongside multimedia company Gagarin to create easy to use, interactive exhibits.

The Centre will feature high-tech educational exhibitions aimed at informing visitors about the volcanic activity, lava flows, glacial floods and earthquakes that have shaped South Iceland over millions of years. It will also feature a viewing deck with extraordinary views over the Geopark. Visitors will also have the opportunity to learn more about Iceland’s elaborate monitoring systems for tracking their various volcanoes and earthquake zones. Volcano cameras will broadcast live images of current activity and up-to date activity reports will be on display.

“We will not be a centre for research,” says Björgvinsson. “We are cooperating with the University of Iceland and the Met Office. They are monitoring all earthquakes and changes in our volcanic systems.”

All images are courtesy LAVA Centre.