“I always work alone...” - an interview with Anja Niemi 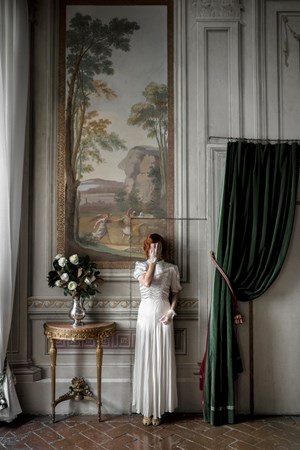 Best known for her mysterious and delicate stories, Norwegian artist Anja Niemi expresses herself through the medium she finds most comprehensive – photography. Her latest project, titled “The Woman Who Never Existed”, was inspired by the words of the pioneering Italian actress Eleonora Duse. Eleonora worked in theatre, travelling the world’s stages alongside Sarah Bernhardt in the early 20th century. Unlike other actresses of the time who seemed to be constantly striving for publicity, she was private and introverted by nature.

Best known for her mysterious and delicate stories, Norwegian artist Anja Niemi expresses herself through the medium she finds most comprehensive – photography. Her latest project, titled “The Woman Who Never Existed”, was inspired by the words of the pioneering Italian actress Eleonora Duse. Eleonora worked in theatre, travelling the world’s stages alongside Sarah Bernhardt in the early 20th century. Unlike other actresses of the time who seemed to be constantly striving for publicity, she was private and introverted by nature.

In a rare interview she made a fascinating statement: ‘away from the stage, I do not exist’. Anja Niemi has chosen to narrate the story of Eleonora Duse in these ‘non-existent’ moments between her appearances on stage. She captures moments of emptiness, loneliness and anticipation. Each carefully staged scene drips with details including delicate wallpapers, fabrics and interiors that evoke the artist’s considerable style and speak of hours of thorough orchestration and hard work before the photographs are taken.

Artdependence Magazine: How and when did your passion for photography start?

Anja Niemi: I’ve always liked telling stories, but was never very good with words. When I first realized I could do it with pictures, I never looked back. That is around 20 years ago now and I have never done anything else. Making pictures is all I know.

AD: Where does the line between fashion and fine art photography lie for you?

AN: I think the two cross each other all the time. The more I use costumes in my work, the more I find myself drawn to the world of fashion. I think I’ve always been inspired by the aesthetic of fashion photography, going back to photographers like Irvin Penn, Guy Bourdin or Helmut Newton. It's all art in my eyes.

AD: All of your works have some kind of innuendo. Does it happen by itself or is it your intention?

AN: I’m always very prepared. I spend a long time planning, but I always leave room for intuition.  The idea is there but how it is conveyed may change along the way.

AD: I like the story behind your latest series: The Woman Who Never Existed. It was inspired by the words of Eleonora Duse: ‘away from the stage I do not exist.’ It feels like you have a deep understanding of her character? Do you associate yourself with her in any way?

AN: My character in 'The Woman Who Never Existed' is all fiction, inspired by what Eleonora said. Her words instantly gave me a story - the story of an actress who started to disappear when no one was looking. Even though the quote is almost a century old,  I think many people can relate to that now. My character has no purpose if no one sees her. She is so used to putting on an act, that when there is no role to play she no longer knows what to do.

AD: While working on your latest series you have created the specific atmosphere and feel for each photograph. You also play the role of Eleonora Duse. Is this your usual way of working?

AN: Although my character is not a reflection of Eleonora the actress, the world I saw after reading her words was inspired by her.  I loosely staged my character in Italy in the early 20th century.  Most of this series is shot in Italy. I rented several houses and apartments as well as a Victorian theatre, focusing on places with rich textures and patterns to contrast my characters bleak personality.  The elaborate costumes and lush interiors are her illusion, without them she fades away.  I always work alone, so collecting costumes, finding locations, doing hair and makeup, playing the part as well as taking the picture is all just part of my process.

AD: Your series ‘Darlene & Me’ 2014 is incredibly beautiful. What is it about?

AN: 'Darlene & Me' started with the content of an old suitcase. After looking through it for the first time I got a strong sense of the previous owner. The case belonged to a beauty counselor named Darlene. It contained makeup samples, brochures and receipts from her few sales.  I found so many signs of uneasiness in her possessions. Most of the case appeared to be untouched but in August 1960 Darlene sold a jar of  'Liquid beauty' and one 'temptress hairspray'. Both were to herself. The case left me with a strong feeling of one woman's attempt at success and a sense of who got in her way. I started to picture her alone, being both beauty counselor and costumer and this led me to my fictional version of ‘Darlene' and her relationship to herself.

AD: Which contemporary photographers do you follow and admire?

AN: One of the shows I enjoyed most in resent years is Taryn Simon's show, 'Paperwork and the will of Capital'. I also loved discovering Clare Strand's work at Paris Photo last year.

AD: Do you have any dream projects you would like to realise?

AN: I do, my next character is being created as we speak, but I can't tell you just yet!