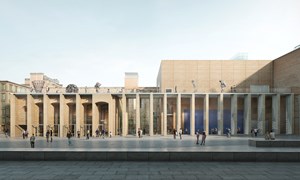 A jury of 21 experts has chosen the ‘Gallery’ proposal by the architecture studio UTE Harquitectes and Christ & Gantenbein for the MACBA extension.

The General Council of the Museu d’Art Contemporani de Barcelona, MACBA’s highest governing body, today announced the decision of the jury of independent experts that has resolved, by a large majority, the open call for the extension of the Convent dels Àngels in favour of the ‘Gallery’ proposal, from the architecture studio UTE Harquitectes i Christ & Gantenbein.

After evaluating the final shortlist of five proposals, all of them of a very high standard, the jury has decided to proclaim the proposal presented under the title ‘Gallery’ as the winner of the open call for the drafting of the preliminary project for the expansion and reformation of the Museu d’Art Contemporani de Barcelona at the Convent dels Àngels and, where applicable, the drafting services for the basic and executive project and technical assistance for managing the works at MACBA. The proposal has obtained the highest score in accordance with the evaluation criteria set by the terms and conditions.

In the words of the jury, Gallery is: ‘A proposal that neatly resolves the dialogue on three different scales: with the neighborhood, the city and the Museum”

This extension, through which the Museum will gain around 3,000 square meters, responds to the challenges and objectives of MACBA's ‘2022 Strategy’: the reorganization and improvement of the Museum's spaces and services, which will allow a more accessible public display of the Collection; the promotion of excellence in areas of research and dissection of knowledge; and, ultimately, the achievement of a provocative Museum in content, capable of generating narratives and debates that are open to diverse audiences. A MACBA that relates to its environment: the Raval, Barcelona, Catalonia and the world.

In this way, MACBA will be able to better deploy the full strengths of a Collection that has been in continuous growth for 25 years and which has become an international benchmark, currently holding almost 6,000 items. The much-needed expansion will allow us to exhibit a greater number of works from the permanent Collection, creating multiple narratives, while at the same time allowing the spaces of the chapel and the Convent dels Àngels to be adapted as exhibition spaces.