The Getty Conservation Institute (GCI) has partnered with Die Neue Sammlung - The Design Museum in Munich, the Wende Museum of the Cold War in Los Angeles and the Cologne Institute of Conservation Sciences to launch German Democratic Plastics in Design, a project looking at how Soviet-era plastics were made and valued.

A children’s barbershop play set, a stylish watering can, a Space Age pedicure kit, and an egg-shaped garden chair are just some of the everyday objects from the former East Germany that hold outsized importance, as scientists use them to learn more about how plastic production and design were shaped behind the Iron Curtain.

The Getty Conservation Institute (GCI) has partnered with Die Neue Sammlung - The Design Museum in Munich, the Wende Museum of the Cold War in Los Angeles and the Cologne Institute of Conservation Sciences to launch German Democratic Plastics in Design, a project looking at how Soviet-era plastics were made and valued.

These institutions are studying over 300 household plastic objects made between 1949 and 1990 that are in the collections of the Wende Museum and Die Neue Sammlung - The Design Museum. Ranging from kitchen appliances and children’s toys to beauty tools and furniture, many of these colorful pieces are design achievements in their own right, and represent the modern aesthetic favored by many countries following World War II.

“Plastics design in Germany really took off in the 1950s, but so far our conservation experience has focused more on objects from the West,” says Odile Madden, senior scientist at the Getty Conservation Institute. “With this project, we get to explore these very appealing plastic objects that East Germans used in their daily lives, and use what we learn about how they were made to ensure those cultural touchstones are protected for the long-term."

As durable as plastic may seem, many historically significant plastic objects are degrading dramatically, appearing stable for decades and then shrinking, distorting, and even disintegrating into piles of crumbs. Conservation scientists, including a team at the GCI, work with museums around the world to study plastic – whether it is plastic-based art or other culturally important everyday plastic objects. By studying the chemical profile of plastics, they can learn more about what they are made of, how they degrade, and how to possibly conserve and restore them.

One area that has not been explored in-depth but that will be addressed by this project is how industrial production and manufacturing techniques, as well as the value countries and cultures put on their plastics, impact how they age and how long they are owned.

East Germany, (officially known as the German Democratic Republic) is the focus of this research because it developed into one of the leading plastics-producing nations in the 1960s, shortly after the Berlin Wall split the country in two. East Germany exported its products to almost all countries of the Eastern Bloc and even to the West via veiled channels. It is also set apart geographically and socio-politically, creating a unique opportunity to analyze plastic production methods that were less influenced by Western practices.

Scientists and conservators will use a number of tools to analyze the plastics in temporary labs located on the Wende Museum campus and at the Pinakothek of Modern, where Die Neue Sammlung - The Design Museum is located. These tools include portable Fourier-transform infrared spectroscopy and X-ray fluorescence spectrometry.

Through visual inspection, researchers have already found some interesting clues about the economics of plastic. For example, one can find embossed systemic numbers on some of the objects, which indicate materials used and sometimes the selling price - traits not typically seen in Western plastics. 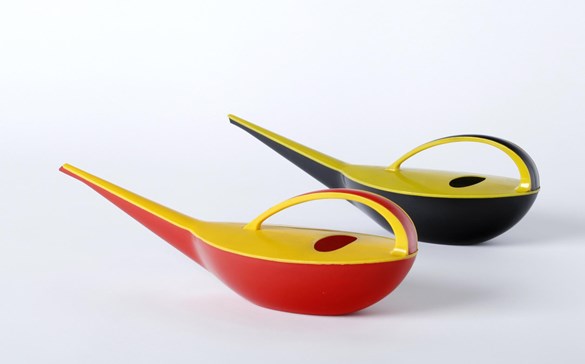 Each partner brings a particular expertise to the project, whether it is through thoughtful and important collecting of modern objects and long-time research into the conservation of design objects made of modern materials at Die Neue Sammlung - The Design Museum, an understanding of Soviet culture and social movements through the lens of art at the Wende Museum, GCI’s mission to advance conservation practice and its team of plastics scientists and conservators, or the experts at the University of Cologne and their knowledge of the conservation, analysis and history of plastics.

The results of the research will be published by the Getty Conservation Institute, and can be used as a tool for museums who want to enhance the conservation techniques for their plastic objects, who want to learn more about the historic context in which these objects were made, and to better interpret their collections for visitors.

The project will also include meetings and conferences for other professionals in this field to learn more about the project and to inform their own work.