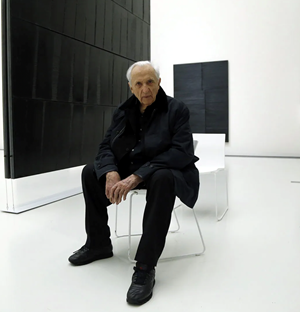 The French artist and stained-glass designer, renowned for his use of black colour, Pierre Soulages, has passed away at the age of 102.

The French artist and stained-glass designer, Pierre Soulages, has passed away at the age of 102. He will be particularly remembered for his uncompromising use of the colour black, and for the stained-glass windows he designed for the abbey church in the central French town of Conques.

"I love the authority of black, its seriousness, its inescapability, its radical nature," Soulages said of his favourite colour. "Black offers amazing possibilities. It is an extraordinarily active colour."

Pierre Soulages is one of the few French painters to have been honoured with a retrospective by the Louvre, during his own lifetime.

Soulages was encouraged by avant-garde luminaries such as Picabia and Fernand Léger, but said he could not find himself in the rage of colour unleashed by the abstraction then in vogue.

Working with the most basic of colours and equipment (Soulages preferred house-paintrers' brushes to the fine art instruments favoured by many of his contemporaries), he saw his work accepted by such global institutions as the Guggenheim in New York, and London's Tate.

As his work became almost exclusively black, reminiscent of the final murals created by his close friend, Mark Rothko, Soulages explained that he had moved into a new mental field. "The paint in the pot is black," he said, "but what matters is the light, the way it is reflected and difused."