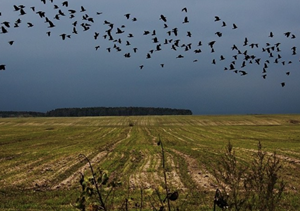 In cooperation with the foundation 'Peace for Art', Neue Galerie im Höhmannhaus presents three positions of current artistic photography from Ukraine. With a clear, undisguised view and in great atmospheric density, the works of all three participants appear documentary and artistically brilliant at the same time. The existential threat to the country, which is under attack from Russian aggression, is reflected in their photographs, as are descriptions of poverty, isolation and social hardship.

Sergey Melnitchenko
In his series of works "Young and free?" and "Young and free", Sergey Melnitchenko (*1991 Mykolayiv), for example, reflects on conditions of interpersonal loneliness, intimacy and traumatically oppressive feelings, which he presents to the viewer in theatrically staged image compositions of naked - male - persons as defenceless individuals existentially thrown back on themselves as if in a stage space. In addition to the real threats of war, questions about the existence and the manifold restrictions of freedom play an important role in his artistic design, in which, among other things, processes of isolation through the internet and not least the consequences of the Corona pandemic are reflected.

Viktoria Sorochinski
In contrast, the narrative portraits by Viktoria Sorochinski (*1979 Mariupol) show people in their personal environments, houses, villages in Ukraine. In her long-term series "Lands of no Return", she repeatedly visited people in rural communities, mostly in the area around Kiev. With great human intimacy, a very personal social image of her country has been created in strong photographic images, which is continuously being worked on.

Alexander Chekmenev
Finally, Alexander Chekmenev (*1969 Luhansk), who lives in Kiev, is one of the most internationally renowned Ukrainian photographers. His work combines the principles of a classical documentary approach with high artistic standards. For many years, one focus of his photographic work has been the Donbass, the large region currently particularly threatened by Russian aggression, where coal has been mined since the 18th century. Chekmenev sensitively and succinctly documents the meagre, arduous lives of the coal miners and their families and thus dedicates himself to a central area of his country's soul in impressive photographic images.

All works were newly produced for the exhibition
All the photographs shown here were newly produced especially for FOCUS UKRAINE. The Kunstsammlungen und Museen Augsburg are pleased to be able to make an active contribution to supporting contemporary Ukrainian culture. Our thanks go to all those involved in the project, especially the 'Peace for Art' founders Cornélia Schmidmayr and Ivanna Bogdanova-Bertrand, as well as the participating artists.