Eli Broad, Los Angeles Philanthropist for Arts and Education Passes Away at 87 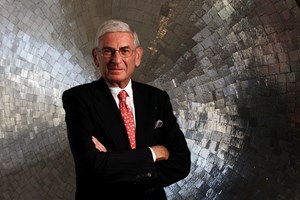 Philanthropist and entrepreneur Eli Broad, who is the only person to found two Fortune 500 companies in different industries and who co-founded with his wife Edye the contemporary art museum, The Broad, has passed away.

Philanthropist and entrepreneur Eli Broad, who is the only person to found two Fortune 500 companies in different industries and who co-founded with his wife Edye the contemporary art museum, The Broad, died at the age of 87, The Eli and Edythe Broad Foundation announced today.

“Eli saw the arts as a way to strive to build a better world for all. He was a fiercely committed civic leader, and his tenacity and advocacy for the arts indelibly changed Los Angeles. He will long be remembered for his unmatched generosity in sharing the arts passionately and widely,” said Joanne Heyler, Founding Director of The Broad.

In 1963, the Broads moved to Los Angeles, which became their adopted hometown and the central focus of much of their philanthropy and civic activism. Since moving to Los Angeles, the Broads have played a leading role in making contemporary art and world-class architecture essential to life in the city for residents and visitors. Over his lifetime, Broad and his wife Edye, (who co-founded The Broad Foundations with her husband and serves on the boards for The Broad Foundations, The Broad, and The Broad Art Foundation), have given a total of nearly $1 billion to the city’s arts and culture institutions, in addition to The Broad. Their support of these institutions ushered in a transformational era for the arts in Los Angeles.

Broad led multiple efforts that have made Los Angeles into a global arts and culture capital, including co-founding two different art museums on Grand Avenue in downtown Los Angeles, the Museum of Contemporary Art (MOCA) and The Broad; spearheading the effort to build the Walt Disney Concert Hall; and playing a catalyzing role in developing the long-fallow Grand Avenue into a cultural center drawing millions from the Los Angeles region and around the world. A tireless civic champion during his life, whose philanthropic legacy also includes education and medicine, Broad had unmatched influence and impact on the arts in Los Angeles. A 2017 profile on Broad in The New York Times noted, “It is difficult to overstate Mr. Broad’s importance to Los Angeles…His contributions to the city’s art and cultural world may well prove the most enduring legacy—particularly for Los Angeles’s now-thriving downtown.”

It was in Los Angeles where the Broads first became interested in collecting art together. After moving to the city, Edye—whose lifelong love of art began in her childhood—began visiting L.A.’s growing constellation of galleries on her own and buying mainly works on paper. But Broad soon joined his wife in collecting art, a passion the couple shared for five decades of their 66-year marriage. “Edye was the first collector in our family, and I came along later—later being some fifty odd years ago. She was my inspiration to collect art,” said Broad. A significant early acquisition was a Vincent Van Gogh drawing acquired in 1972. By the 1980s, however, the Broads had become immersed in contemporary art, believing that by collecting the art of our time, they could create a meaningful art collection and enjoy the innovations and thinking of living artists.

Within the decade, Broad, along with other arts patrons in Los Angeles, helped found and create the Museum of Contemporary Art (MOCA) in 1979. As the founding chairman of MOCA until 1984, Broad played a critical role in establishing the museum. Broad negotiated the purchase of 80 abstract expressionist and pop works from Italian businessman and collector Count Giuseppe Panza di Biumo, who was known for being the first European collector of postwar American art and for amassing one of the world’s largest and premiere collections of postwar American art. The 80 works that were purchased formed the core of MOCA’s renowned permanent collection, giving the museum “instant credibility,” according to The New York Times. When Panza died in 2010, Broad told The New York Times, “Having his collection helped us get other works of great quality that we otherwise may not have gotten. I think because of his collection, we were not viewed as another provincial museum but a world-class institution.”

A central goal in the Broads’ philanthropy in the visual arts is public access to their collection. Their first major step in fulfilling this goal was establishing The Broad Art Foundation in 1984, a global lending library dedicated to increasing public access to contemporary art through an enterprising loan program. The foundation has made more than 8,700 loans from the Broads’ personal collection, together with the foundation’s collection, to over 550 museums and galleries around the world.

In the mid-2000s, Broad gave a $60 million gift to the Los Angeles County Museum of Art to fund a new building dedicated to contemporary art and to support the museum’s contemporary art acquisitions as part of his vision to advance Los Angeles’ reputation as a global arts capital. Designed by renowned architect Renzo Piano, the three-story Broad Contemporary Art Museum (BCAM) opened in 2008 and hosts rotating artwork exhibitions within 60,000 square feet of galleries. Later that same year, Broad gave $30 million to MOCA to rebuild its endowment and provide exhibition support when it faced a financial crisis, reinvigorating the institution.

Since the 1970s, Broad saw potential in Grand Avenue in downtown Los Angeles’ Bunker Hill neighborhood as a vibrant cultural center for the Southern California region, and spent decades working to realize this vision. He told the Los Angeles Times in 2019, “A great city needs a vibrant center where people come to enjoy cultural riches like museums, dance, opera, theater, and the symphony, or to take part in civic life at parades, protests, and celebrations.”

In 1996, along with former Los Angeles mayor Richard Riordan, Broad spearheaded the fundraising campaign for the roughly $300 million required to build Walt Disney Concert Hall on Grand Avenue. Designed by Frank Gehry and opened in October 2003, it is the home of the acclaimed Los Angeles Philharmonic and considered an architectural masterpiece. Soon after, Broad helped create the Grand Avenue Project, a joint initiative between the city of Los Angeles and Los Angeles County tasked with redeveloping certain sections of Bunker Hill. Believing that green space was a vital need in the area, Broad was able to negotiate with the city and county’s chosen developer to secure funds for Grand Park, the public space between City Hall and the Music Center. The park, today a vibrant civic space and site of celebrations, protests, and festivals, was built without requiring any taxpayer money.

Broad was also a longtime supporter of the L.A. Opera (also located on Grand Avenue) with Edye, whose love of opera brings her to downtown Los Angeles for performances, funding a new, critically acclaimed production of Richard Wagner’s “Ring” cycle in 2009-2010, providing operating support for the company, and endowing the director’s chair.

In addition, Broad helped create the Ramón C. Cortines School of Visual and Performing Arts on Grand Avenue, which was designed by Pritzker Prize-winning architect Wolf D. Prix, the design principal and CEO of the architectural firm COOP HIMMELB(L)AU, who was selected through an architectural competition supported by Broad. A striking presence in downtown Los Angeles, the school serves more than 1,600 students from the surrounding neighborhood and from the city who are aspiring to be the next generation of visual and performing artists.

Most significantly, Broad chose Grand Avenue for the home of the museum he co-founded with Edye, The Broad. The Broads had spent nearly 50 years building one of the world’s most significant collections of postwar and contemporary art, and had always wanted to bring contemporary art to the widest possible audience. In August 2010, Broad announced that they would build a new contemporary art museum to fulfill this philanthropic commitment—the first entirely new art institution to be built in Los Angeles in nearly 20 years.

The Broad museum opened in September 2015, revitalizing and driving the area’s transformation into the cultural center that Broad had envisioned, with millions of visitors coming from across the region and around the world to enjoy the rich and lively arts and culture scene along Grand Avenue.

Designed by Diller Scofidio + Renfro, The Broad houses approximately 2,000 works of postwar and contemporary art by artists including Jean-Michel Basquiat, Mark Bradford, Jasper Johns, Jeff Koons, Barbara Kruger, Glenn Ligon, Yayoi Kusama, Kerry James Marshall, Takashi Murakami, Kara Walker, and Cindy Sherman. General admission to The Broad is free, and the museum presents a dynamic schedule of exhibitions and public programs. Broad had anticipated that the museum would attract 250,000 people a year, but the museum, in fact, defied expectations, welcoming more than 900,000 visitors in 2019 alone—three times what Broad expected. Since the museum’s opening, The Broad consistently attracts a strikingly young and diverse audience that reflects the demographics of the L.A. region: approximately 70 percent of The Broad’s visitors identify as non-white, and 66 percent are 35 and under.

Broad’s philanthropy in the arts also included a major contribution to the School of the Arts and Architecture at UCLA for The Eli and Edythe Broad Art Center, designed by Richard Meier. In 1991, the Broads endowed The Eli Broad College of Business and The Eli Broad Graduate School of Management at Michigan State University (MSU), where Broad graduated cum laude in 1954. In June 2007, the Broads announced a $26 million gift to create the Eli and Edythe Broad Art Museum at MSU, which was designed by acclaimed architect Zaha Hadid, and they gave another $2 million to the project in January 2010. In 2008, the Broads created a $10 million endowment for programming and arts education at The Eli and Edythe Broad Stage and The Edye Second Space at the Santa Monica College performing arts center.

From 2004 to 2009, Broad served as a Regent of the Smithsonian Institution by appointment of the U.S. Congress and the President, and was a life trustee of MOCA, LACMA, and the Museum of Modern Art (MoMA). Broad was a Fellow of the American Academy of Arts and Sciences, and in 1994 was named Chevalier in the National Order of the Legion of Honor by the Republic of France. Broad served on the board of the Future Generation Art Prize. Broad received the Carnegie Medal of Philanthropy in 2007 and the David Rockefeller Award from the Museum of Modern Art in 2009. In 2018, the Broads were named Distinguished Philanthropists at the John F. Kennedy Center for the Performing Arts and received the American Federation of the Arts Cultural Leadership Award in 2018. The Broads received honorary degrees from the University of Southern California in 2019.

Broad is survived by his wife Edye and his two sons, Jeffrey and Gary.