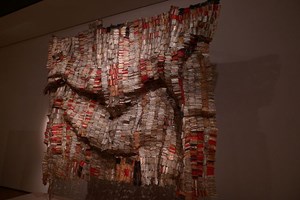 El Anatsui has received the Golden Lion for Lifetime Achievement of the 56th International Art Exhibition of the Biennale di Venezia – All the World’s Futures. The decision was made by the Board of Directors of la Biennale chaired by Paolo Baratta, former minister in the Italian government, upon recommendation of the Curator of the 56th International Art Exhibition Okwui Enwezor.

El Anatsui has received the Golden Lion for Lifetime Achievement of the 56th International Art Exhibition of the Biennale di Venezia – All the World’s Futures.
The decision was made by the Board of Directors of la Biennale chaired by Paolo Baratta, former minister in the Italian government, upon recommendation of the Curator of the 56th International Art Exhibition Okwui Enwezor, acknowledging that with the following motivations:
“Born in 1944 in Anyako, Ghana, and based at the university town Nsukka in Nigeria since 1975, El Anatsui is perhaps the most significant living African artist working on the continent today. The award for which I am recommending him is an important honor to an artist who has contributed immensely to the recognition of contemporary African artists in the global arena. It is also a worthy recognition of the originality of Anatsui’s artistic vision, his long-term commitment to formal innovation, and his assertion through his work of the place of Africa’s artistic and cultural traditions in international contemporary art.  The Golden Lion Award acknowledges not just his recent successes internationally, but also his artistic influence amongst two generations of artists working in West Africa. It is also an acknowledgment of the sustained, crucial work he has done as an artist, mentor and teacher for the past forty-five years. 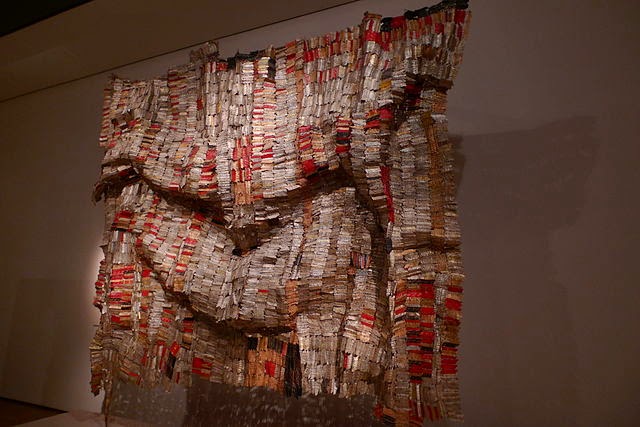 Man's Cloth by El Anatsui. Between 1998 and 2001. Source: wikimedia commons
A graduate of the sculpture program of the acclaimed Kwame Nkrumah University of Science and Technology, Kumasi, Anatsui’s career direction was determined not so much by the still neo-colonial 1960s curriculum of the art school as by his identification with the progressive cultural politics championed by Ghanaian and African cultural nationalists of the independence era. Working with everyday objects on which he imbued philosophical and idiomatic signs, Anatsui’s earliest work consisted of round wood reliefs inspired by trays used by Kumasi traders for displaying their wares. On these trays he carved adinkra motifs and other designs and in the process was attracted to the dynamic relationship between the rich symbolism and graphic power of adinkra signs. Once aware of this possibility of simultaneous evocation of significant form and idea in adinkra, Anatsui, who in 1975 joined the faculty of the Fine and Applied Arts Department at the University of Nigeria, expanded his field of artistic resources to other West African design and sign systems, and syllabaries, including Igbo Uli, Efik Nsibidi, Bamun and Vai scripts. In time, he became a leading member of the famed Nsukka School presented at the important art exhibition at the Smithsonian National Museum of African Art in 1997. Today, Anatsui remains committed to the development of new artistic forms from African sources as well as from materials available in his local environment.”
The acknowledgment will be awarded to El Anatsui on Saturday May 9th 2015 during the awards ceremony and inauguration of the 56th Exhibition.