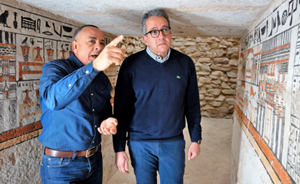 Five ancient Egyptian Tombs were discovered today in Saqqara area, Egypt adding a new achievement to the big history of one of the oldest civilizations in the world.

Five ancient Egyptian Tombs were discovered today in Saqqara area, Egypt adding a new achievement to the big history of one of the oldest civilizations in the world.

Ministry of Tourism and Antiquities announced today on its official Facebook page, that minister Khaled El-Enany and the Secretary-General of the Supreme Council of Antiquities Mostafa Waziri have toured the excavation work in the place which is done by an Egyptian excavation team. The Ministry also stated that the team is still busy working on the toll of time off the tombs’ walls, identifying the colors of its decorations and will announce more details on the 19th of March.

El-Enany entered one of the newly discovered tombs to inspect the team's work and also thanked them for their hard work and efforts in revealing Saqqara's secrets. While Waziri, for his part, stated that the five tombs are in good condition and that they belonged to top officials.

Waziri also explained that the first tomb belongs to a person who is believed to be a high-ranking statesman. The tomb consists of a deep burial shaft that leads to a room decorated with funeral scenes representing offering tables, the seven holy oils and a palace façade. A limestone sarcophagus was also unearthed within the tomb.

While the second tomb is most likely belongs to a woman that could be the wife of a man named Yaret because of its proximity to his tomb and it also has a rectangular burial shaft. The third one has a six-meter deep burial shaft and it belongs to Pepi Nefhany, who held the positions of supervisor, priest, and purifier of the great house.

Furthermore, the fourth tomb is for a lady called Petty, who was a priest of Hathor and was in charge of the king's beautification. It also includes a six-meter-deep burial shift. The fifth one is dedicated to Henu, the royal house's overseer and superintendent. It consists of seven meters deep rectangular burial hole.