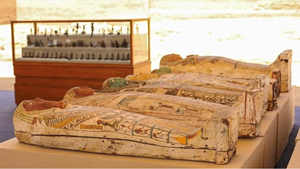 Egyptian authorities unveiled on a major new archaeological find of 250 sealed coffins containing mummies, 150 bronze statues of ancient gods and goddesses, and other antiquities at the Saqqara necropolis, south of the capital Cairo.

Egyptian authorities unveiled on a major new archaeological find of 250 sealed coffins containing mummies, 150 bronze statues of ancient gods and goddesses, and other antiquities at the Saqqara necropolis, south of the capital Cairo.

An archaeological mission working in Bubastian Cemetery area discovered a bronze statues cachette in the site that dates back to the Late Period of ancient Egypt, Xinhua news agency quoted Mostafa Waziri, Secretary-General of the Supreme Council of Antiquities, as saying to reporters on Monday.

The mission has also discovered 250 intact coloured wooden coffins that date back to 500 B.C. inside several burial wells comprising well-preserved mummies as well as a group of golden-face wooden statues, painted wooden boxes, and amulets, he added.

During the excavation work inside one of the wells, the mission found a papyrus that writes verses from the Book of the Dead, said Waziri.

The Book of the Dead is an ancient Egyptian funerary text generally written on papyrus and used from the beginning of the New Kingdom (around 1550 B.C.) to around 50 B.C.

It consists of a number of magic spells intended to assist a dead person's journey through the Duat, or underworld, and into the afterlife and written by many priests over a period of about 1,000 years.

The discovery was made during the fourth excavation of the site that started in April 2018.

The Egyptian mission will start the fifth excavation works in September, Waziri added.

Saqqara, located some 31 km from Cairo, contains ancient burial grounds of Egyptian royalty, serving as the necropolis for the ancient capital of Memphis.

It is famous for the the Pyramid of Djoser, the oldest complete stone building complex known in history built during the Third Dynasty (2686 B.C.).