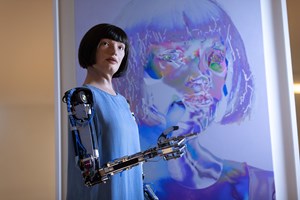 Designed to create works of art, this charming robot may look harmless enough, but she seems to have caused a diplomatic row.

Ada, a British-made humanoid named after 19th-century scientist and mathematician Ada Lovelace, was detained by Egyptian security forces on suspicion of being part of a spy plot. She and her Oxford-based creator, Aidan Meller, were on their way to an exhibition next to the Pyramids of Giza this week, stopped by border guards after landing in Cairo.

Robot artist Aida was detained by Egyptian security forces in Cairo on suspicion of being part of a spy plot. Authorities confiscated Aida and demanded the removal of her eyes, including the camera, according to Meller. He claims she is being treated as a “security issue.” This may include fear that she is part of a wider range of espionage activities.

Gareth Bailey, the British ambassador to Egypt, has now been drawn into line, and Meller said last night he was working “in the middle of the network” to secure Aida’s release.

Mr. Meller added, “They are essential to her drawing, painting and sculpting. She would also look strange without them.”

Created by a Leeds engineer two years ago, Ai-Da’s robotic hands calculate virtual paths based on what’s in front of them, interpret the coordinates, and create a work of art. She is said to be the world’s first surreal robot capable of attracting people from life.

She and her Oxford-based creator Aidan Meller are on their way to an exhibition next to the Pyramids of Giza this week, demanding the removal of her eyes, including the camera, stopped by the guards.

And her paintings are a hot topic at V & A, London Design Festival, Design Museum and Tate Modern exhibitions.

The robot was scheduled to appear as one of 10 international artists exhibiting their work on the site in front of the pyramid while being transported to Cairo for today’s ‘Forever Is Now exhibition’.

The exhibition will be held until November 7th with the support of Egypt’s Ministry of Tourism and Antiquities, Ministry of Foreign Affairs and UNESCO.

Meller said: “It is the first time in 4,000 years that contemporary art has been granted near the pyramids.

“We put a tremendous amount of time and energy into creating innovations to put our hands in clay so that Aida could create huge sculptures.”