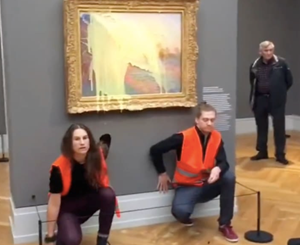 Two protesters have thrown what appears to be mashed potato over Monet's 'Les Meules' painting at a museum in Germany.

Two protesters have thrown what appears to be mashed potato over Monet's 'Les Meules' painting at a museum in Germany.

In video footage posted to social media, the demonstrators can be seen throwing the food over the artwork — estimated to be worth £96 million — before gluing themselves to the wall.

They claimed to be part of the Letzte Generation group, which accuses governments of fuelling the climate crisis.

"We are in a climate catastrophe. And all you are afraid of is tomato soup or mashed potatoes on a painting.

"You know what I'm afraid of? I'm afraid because science tells us that we won't be able to feed our families by 2050. Does it take mashed potatoes on a painting to make you listen?

"This painting is not going to be worth anything if we have to fight over food. When will you start to listen and stop business as usual?

Extinction Rebellion UK also shared footage of the incident, and wrote on Twitter: "Societies that hold the past with reverence but the future with contempt need to be woken up.

"No Monets on a dead planet. Till the media report the full scale of the climate crisis, expect more mash potatoes on Monet paintings."

The Letzte Generation protesters made reference to a similar demonstration in the UK last week, where two Just Stop Oil protesters threw a tin of soup over Van Gogh's Sunflowers painting at the National Gallery.