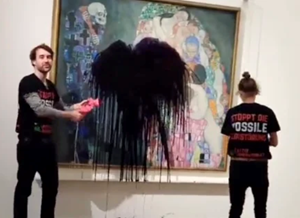 Activists of the "Last Generation" spilt a black, oily liquid on the Klimt painting "Death and Life" in the Leopold Museum in Vienna on Tuesday.

The museum has confirmed the incident, saying, “We can only hope that the painting was not damaged”.

“Restorers are working to determine whether the painting protected by glass has been damaged,” Klaus Pokorny, spokesperson for the Viennese Leopold Museum, told AFP.

In a statement, the activists wrote: “We need immediate measures against #ClimateBreakdown NOW. Lowering the speed limit to 100km/h on highways costs nothing to implement, saves 460 million tons of CO2 per year in #Austria alone and leads to less noise, better air quality and safer roads.”

“Stop the fossil destruction” can be heard in the video posted by the group. The activists are protesting against new oil and gas drilling.

“We’re racing towards a climate hell. For 50 years, we’ve known the problem. Emissions are at an all-time high. Heat waves. Droughts. Agriculture will stop working”, one of the activists shouted during the action.

Another activist, who glued himself to the protective glass in front of the picture, said: “Companies like OMV, for example, sponsor this exhibition. They want to wash their slate clean with such subsidies, just like the tobacco industry did back”.

To commemorate the death of Leopold III, an Austrian prince, the homonymous museum had free admission on November 15th, sponsored by the Austrian oil and gas giant OMV.

Despite strict controls, such as bags not being allowed inside, the activists were able to smuggle the liquid in a water bottle under their clothes, the newspaper Der Standard reported.

Police and museum security were present and could be seen containing the activists. Several rooms had to be closed to visitors as the protesters spoke with the authorities on site.

Der Standard added that the liquid had already been wiped away from the glass after the incident.

Numerous masterpieces across Europe have been attacked in recent weeks in protests at the lack of action against climate change. They have glued themselves to a Francisco Goya in Madrid, thrown soup at Vincent van Goghs in London and Rome, and mashed potatoes on a Claude Monet.

In the wake of the protests, dozens of the world’s top museums issued a joint declaration last week saying environmental activists who attack paintings “severely underestimate” the damage that could be caused.

The statement was spearheaded by the Prado in Madrid, and signed by the directors of more than 90 world-renowned museums including the Guggenheim in New York, Louvre in Paris and Uffizi in Florence.