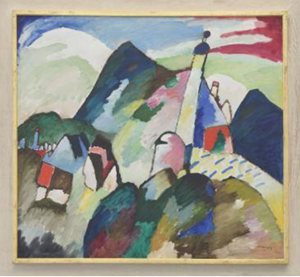 The Committee has assessed an application dated 25 February 2019 for restitution of the painting Blick auf Murnau mit Kirche [known in English as View of Murnau with Church] by the artist Wassily Kandinsky. Eindhoven City Council became owner of the work in 1951, and it has hung in the Van Abbemuseum in Eindhoven since then. The Committee issued a binding opinion on 29 January 2018 rejecting an earlier application for restitution of this work because it was not possible to establish with the required degree of plausibility that Johanna Margarethe Stern-Lippmann (1874-1944), the Applicants’ Jewish grandmother/great-grandmother, had lost possession of the work during the Nazi regime.

The request for reconsideration by the City Council and the Applicants was submitted on the grounds of new facts that apparently had emerged from correspondence and lists of artworks that were not previously known to the Committee. The Committee has established that these documents do indeed contain new facts.

Those new facts and the investigation that was launched on the basis of them have given the Committee reason to conclude that it is now sufficiently plausible that the painting ceased to be in the possession of Margarethe Stern-Lippmann during the Nazi regime.

The Committee’s changed conclusion is based on the following three considerations. In accordance with the requirement in the Washington Principles, during the assessment the Committee took into account ‘unavoidable gaps or ambiguities in the provenance in light of the passage of time and the circumstances of the Holocaust era’.