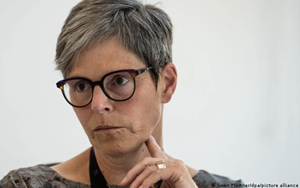 Sabine Schormann has resigned as head of documenta, which is a summerlong art exhibition that takes place every five years in Germany.

The director general of Documenta, one of Germany's most renowned exhibitions of modern art, resigned on Saturday amid an antisemitism scandal.

The shareholders and supervisory board mutually agreed to terminate Sabine Schormann's contract at short notice, a statement from the organization said.

Indonesian mural courts controversy
The decision follows an outcry about the imagery used in a large artwork by an Indonesian collective that had to be taken down just days after the exhibition — in the sleepy central German city of Kassel — opened in June.

The mural features a soldierlike figure depicted as a pig wearing a scarf with a Star of David and a helmet bearing the word "Mossad" — the name of Israel's national intelligence agency.

On the same picture, a man is depicted with sidelocks often associated with Orthodox Jews, fangs and bloodshot eyes, and wearing a black hat with the SS insignia.

Jewish leaders and Israel's embassy to Germany voiced "disgust" at the artwork and repeatedly called for Schormann to quit.

Documenta said it would appoint an interim successor shortly.

Schormann had originally defended the piece, named "People's Justice," despite the international outcry, saying the exhibition's artistic directors were free to curate the show as they wished.