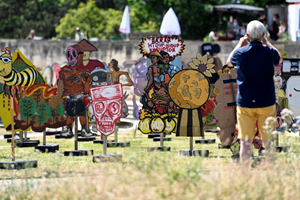 Due to a depiction of a figure in the work People’s Justice (2002) by the collective Taring Padi, which triggers anti-Semitic readings, the collective, together with the management of documenta and the Artistic Direction of documenta fifteen, has decided to cover up the work in question at Friedrichsplatz and to install an explanation next to the work.

Due to a depiction of a figure in the work People’s Justice (2002) by the collective Taring Padi, which triggers anti-Semitic readings, the collective, together with the management of documenta and the Artistic Direction of documenta fifteen, has decided to cover up the work in question at Friedrichsplatz and to install an explanation next to the work.

Taring Padi comments as follows:
“The banner installation People’s Justice (2002) is a campaign against the militarism and violence we experienced during the military dictatorship of Suharto for 32 years in Indonesia, and its legacy as it exists up through the present day. Therefore, the depiction of military figures in the banner expresses our experiences. As such, all figures depicted in the banner reference commonly-known symbols within the Indonesian political context, for example corrupt bureaucracy, military generals and their soldiers which are symbolized by pigs, dogs, and rats to criticize an exploitative capitalist system and military violence. The banner was exhibited for the first time in the South Australia Art Festival in Adelaide in 2002. Since then, the banner has been exhibited in many different places and contexts, particularly during social political events, including: Jakarta Street Art Festival (2004), Taring Padi’s retrospective exhibition in Yogyakarta (2018) and the Polyphonic Southeast Asia Art exhibition in Nanjing, China (2019).

Taring Padi is a progressive collective that has been campaigning to support and respect diversity. There is no record in our work that aims to portray any ethnic groups in a negative way. Figures, icons, caricatures, and other visual vocabularies in our works are always culturally specific to our own experiences.

The display of People’s Justice in Friedrichsplatz is the first presentation of the banner in a European and German context. It is not meant to be related in any way to antisemitism. We are saddened that details in this banner are understood differently from its original purpose. We apologize for the hurt caused in this context. Therefore, with great regret, we cover up the work. This work then becomes a monument of mourning for the impossibility of dialogue at this moment. This monument, we hope, will be the starting point for a new dialogue.”

The General Director of documenta and Museum Fridericianum gGmbH Dr. Sabine Schormann states: “The documenta management is not, and should not be, an authority to which artistic exhibits must be submitted for inspection in advance. The banner was installed at Friedrichsplatz last Friday afternoon after necessary restoration work was carried out on the 20-year-old work due to storage damage. I would like to explicitly point out once again that the work was not conceived for Kassel, not for documenta fifteen, but was created in the context of Indonesia’s political protest movement and was shown there, and in other non-European locations. Now is the first time that the work is shown in Germany and in Europe. All parties involved regret that feelings were hurt in this way. Together we have decided to cover up the banner. In addition, we obtain additional external advise.”

Feature image: Cardboards, a work of the Indonesian art collective Taring Padi, at the Friedrichsplatz square in front of the Fridericianum Museum, one of the venues of Documenta 15 in Kassel. Photo: Ina Fassbender/AFP via Getty Images.