Dmitri Vrubel, Painter of Kissing Communist Leaders on Berlin Wall Passes Away at 62 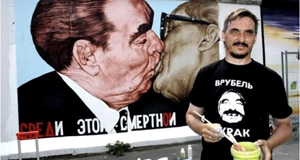 Dmitri Vrubel, a Russian-German painter best known for his painting of the kissing communist leaders Leonid Brezhnev and Erich Honecker on the Berlin Wall, died aged 62, as reported on Monday, August 15.

Dmitri Vrubel, a Russian-German painter best known for his painting of the kissing communist leaders Leonid Brezhnev and Erich Honecker on the Berlin Wall, died aged 62, as reported on Monday, August 15.

The news of the death of Dmitri Vrubel, the beloved Berlin Wall painter was shared by Milena Orlova editor-in-chief of the Art Newspaper Russia, on Facebook, who stated:

“Oh, how hate to be the messenger of death. Dmitri Vrubel has died. My condolences to his loved ones and friends,” she said.

Although the cause of his death has no been reported, on July 14, a photograph of the painter at the hospital was shared on his Facebook page.

His wife had previously stated that his heart had become very weak following a battle with Covid.

Born in Moscow in 1960, Vrubel studied at the Moscow State Pedagogical Institute. In recent years, the painter lived in Germany.