Craig Ruddy, Archibald Prize-Winning Painter, Passes Away at 53 Due to Covid Complications 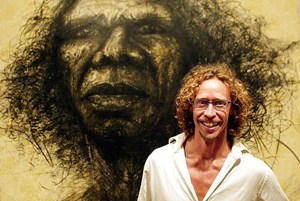 Artist Craig Ruddy, who won the Archibald Prize with his striking portrait of actor David Gulpilil, has died aged 53 after contracting Covid-19.

Artist Craig Ruddy, who won the Archibald Prize with his striking portrait of actor David Gulpilil, has died aged 53 after contracting Covid-19.

Ruddy’s 2004 Archibald-winning Gulpilil portrait made headlines when another artist, Tony Johansen, took legal action against the Art Gallery of NSW, which administers the prize. Johansen’s claim, which was dismissed by the NSW supreme court, was that Ruddy used mostly charcoal for the work, making it a drawing, not a painting.

The court heard that Ruddy had used acrylic paint, charcoal, pencil, crayons, pastels and varnish in the work.

NSW Supreme Court Justice John Hamilton dismissed the claim, saying it was “impossible on any objective basis to exclude the portrait from the category of a work which has been ‘painted’.”

Ruddy was devastated by the death of Gulpilil just over a month ago. The artist and the Yolŋu actor developed a strong bond in 2004 when Ruddy drew him for Two Worlds. Ruddy drew Gulpilil at the Colo River while the actor took a break from rehearsals for his one-man show, directed by Neil Armfield. Ruddy only had a couple of hours to create the portrait, which he drew on colonial wallpaper.

After Gulpilil’s death from lung cancer in November last year, Ruddy posted a picture to social media of him creating the portrait, writing: “This is how I’ll always remember you, strong, resilient and cheeky. My heart is heavy knowing you’ve left this world but your legendary spirit will live on forever.”

In December, Ruddy completed his last body of work, titled 2021, which Daniel Browning, host of Radio National’s The Art Show, said “puts me in mind of the dystopias conjured by the Spanish painter Goya”.

Created in the studio adjoining his home in the Byron Bay hinterland, Ruddy said of the works: “These past two years have been a rollercoaster of emotions and feelings for all of us, including myself … Creating in my studio has helped me to maintain balance and perspective. We are definitely living in unprecedented times and the arts and deep human connection are paramount.”

Ruddy was born in Forestville, Sydney in 1968 and studied design and fashion illustration in the 1980s. In 2001 he quit his design career to become a painter, and over the past two decades divided his time between homes in Tamarama in Sydney’s east, the Byron Bay hinterland and Buenos Aires.

On his website, his work is described as exploring “questions of social conscience as well as current environmental issues. The recognition of Australian Indigenous people and culture is also a core theme.”