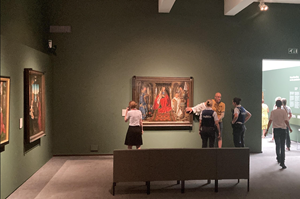 Climate activist Wouter Mouton has made himself heard again. He glued himself to the security glass on Tuesday afternoon in front of the world-famous artwork 'Madonna met Kannunik Joris van der Paele' by Jan Van Eyck.

Climate activist Wouter Mouton has made himself heard again. He glued himself to the security glass on Tuesday afternoon in front of the world-famous artwork 'Madonna met Kannunik Joris van der Paele' by Jan Van Eyck, which is being exhibited in the Groeninge Museum, Bruges (Belgium). Hopefully, there's no damage done to the glass of 80,000 Euros. He initially had another work of art in mind for his action, but the police beat him to it.

In recent weeks, there have been repeated actions in the UK by the 'Just Stop Oil' group, in which activists glue themselves to the frames of well-known works of art, in order to attract attention and make a position on the climate.

Wouter Mouton (44), who previously disrupted the finale of the Tour of Flanders and the finale of the Belgian Cup, was inspired and thought of the 'Madonna with child', the only statue of Michelangelo outside Italy and an absolute masterpiece in the Church of Our Lady in Bruges.

Mouton had announced his action to the media, but the news had apparently also reached the Bruges police. They were present with four to keep an eye on the statue.

The ‘Madonna met Kannunik Joris van der Paele’ is the largest painting by Jan van Eyck after the ‘Mystic Lamb’ that has survived. It is one of four authentic works by Jan van Eyck that are still kept in a Belgian collection. The work is - fortunately - well protected by a glass plate. "I had no intention of damaging the work," Mouton said.