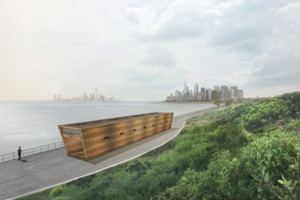 Creative Time, Governors Island Arts, and Times Square Arts are pleased to present the first public art exhibition by Charles Gaines, The American Manifest. The serial public art installation will unfold in three parts, or chapters, across three locations over the course of two years

Creative Time, Governors Island Arts, and Times Square Arts are pleased to present the first public art exhibition by Charles Gaines, The American Manifest. The serialized public art installation will unfold in three parts, or chapters, across three locations over the course of two years — Times Square, Governors Island, and Cincinnati. The project will debut in New York City on July 13, 2022 in Times Square with a new iteration of the artist’s pioneering Manifestos performances coupled with an installation of sculptures of the complex root systems of the American Sweetgum tree on view through the summer. Moving Chains, a monumental, kinetic sculptural work sited on Governors Island in New York Harbor opens next in early October 2022 before journeying to the banks of the Ohio River in Cincinnati in the summer of 2023.

Tracing the flow of these northeastern waterways — the historically charged rivers and ports of New York City and Cincinnati’s Ohio River, which are not often considered in relation to each other — Gaines offers a multifaceted interrogation of the dual role of the northern states in both maintaining and abolishing slavery, and the enduring implications of the racialized systems, myths, and logics that underpin the nation’s economic and legal foundations that persist today. Through large-scale sonic and sculptural works, the project grapples with the entangled systems of property, citizenship, displacement, and freedom that enables and furthers racial capitalism, a mechanism for enforcing white supremacy in the United States of America. Gaines’s work for The American Manifest originates with the 1857 Dred and Harriet Scott historic Supreme Court decision, which decreed that people of African ancestry were not U.S. citizens and therefore could not sue for their right to freedom, and demands the viewer contend with the legacies and afterlives of chattel slavery, Manifest Destiny, and colonialism.

“By exploring the Dred and Harriet Scott Decision, The American Manifest is intended both critically and poetically to unpack the complexity of America's humanist ideals. It is intended to take us through the slippery contradictions that make up the American narrative,” said Charles Gaines.

Charles Gaines has been a pivotal figure in conceptual art for the past five decades, known for his body of work engaging formulas and systems that interrogate relationships between the objective and the subjective realms. The concept of identity politics has played a central role within Gaines’s oeuvre, and the radical approach he employs addresses issues of race in ways that transcend the limits of representation.

“The American Manifest is a sharp look at the history of the United States and how our laden past manifests in our contemporary struggles. It is only through an interrogation and understanding of these entangled histories that we may face our systemic societal ills,” said Creative Time Executive Director Justine Ludwig.

ABOUT THE AMERICAN MANIFEST

Sited within two key cities whose histories have shaped the identity of America, this project invites the public to consider New York and Cincinnati’s waterways’ in both upholding slavery and securing liberation, a duality that challenges reductive narratives of the history and legacy of slavery in America. Times Square, often called “the crossroads of the world,” exists as a global emblem of capitalism, commerce, and media, with over 300,000 daily pedestrians. Five miles away, in the middle of the New York Harbor, Governors Island feels comparatively serene. The island played an integral role in the city’s economic and political history; it served as a Lenape fishing and hunting camp, an early colonial Dutch settlement, a home for the British ruling Governors and, later, a U.S. Military and Coast Guard base from the Revolutionary War until the late 1990s, before becoming publicly accessible in the mid-2000s. Halfway across the country, Cincinnati’s John G. and Phyllis W. Smale Riverfront Park connects downtown Cincinnati to the Ohio River, which historically served as a demarcation point and transportation route between southern slave states and the free states in the north.

The project originates in Times Square with a performance-based installation, Manifestos 4: The Dred and Harriet Scott Decision, and sculptural installation, Roots.

Continuing Gaines’s Manifestos series, and specifically building upon his Manifestos 4 composition with the creation of a new vocal arrangement, this performance transforms the original text of the Supreme Court’s 1857 Dred and Harriet Scott historic decision, which decreed that people of African ancestry were not U.S. citizens and therefore could not sue for their right to freedom. Featuring a woodwind quintet, piano and tenor, the 5-part performance will be staged on July 13 and July 14 in America’s modern-day commercial crossroads, Times Square.

Roots, on view from July 13 through September 23, 2022, consists of a series of seven American Sweetgum trees, presented with the root systems upside down and painted to a surreal and dystopic effect. The trees, which were indigenous to the eastern United States and grew in Times Square, a forested area and beaver pond prior to colonization, are known for their impressive root systems that require vast open spaces to grow.

“We are incredibly honored to launch the first chapter of Charles Gaines’s monumental, multi-sited exhibition with works that call upon both Indigenous histories and present day symbolism of Times Square to tell the story of our country’s complex legacies,” said Times Square Arts Director Jean Cooney.

Sited at the base of Outlook Hill on Governors Island with views of the Statue of Liberty, Ellis Island, and Lower Manhattan, Moving Chains — a 100 foot-long immersive, kinetic sculpture — evokes the hull of a ship reverberating with the low rumble of nine chains churning overhead, while visitors pass through below. Eight of the chains move along at the pace of New York Harbor’s currents, while a central ninth chain moves noticeably faster, at the speed of the ships and barges that have traveled the city’s waterways over centuries. Complicating narratives of slavery that easily demarcate northern virtue and southern sin, Moving Chains illuminates the exchange of people, capital, and goods between the north and south, calling attention to the nation’s economic, judicial, and political frameworks that continue to shape the lives and define the freedoms of Americans today.

“The second chapter in Charles Gaines’s monumental project The American Manifest, Moving Chains is a historic work that we are humbled to present on Governors Island, a site whose landscape is intertwined with the stories and struggles of New Harbor and the waterways that have defined this nation’s past, present, and future,” said Meredith Johnson, VP of Arts and Culture and Head Curator at the Trust for Governors Island. “We are honored to present Charles Gaines’s pivotal work on Governors Island, and look forward to welcoming visitors and all New Yorkers to engage through a dynamic calendar of public programs,” added Clare Newman, President and CEO of the Trust for Governors Island. “Moving Chains represents a key investment in Governors Island Arts’ mission to create transformative art experiences for all New Yorkers to engage with critical issues of our time while in this extraordinary public space.”

The project will be accompanied by a series of public programs that re-consider legal and cultural definitions of freedom, bringing together an interdisciplinary group of thinkers.

Opening in multiple locations throughout Cincinnati in Summer 2023, The American Manifest will travel to the banks of the Ohio River in Cincinnati’s John G. and Phyllis W. Smale Riverfront Park,  accompanied by an additional site-specific commissioned work to deepen the geographic nuances of colonial expansion. The Ohio River has historically represented both a route to liberation, as the one-time gateway between slave and “free soil” states, as well as a historic route used to transport enslaved persons to the infamous port of New Orleans. The project’s journey to this location from New York makes a final connection between the plantation logic of people as property, federally recognized in the case of Dred and Harriet Scott, and the era of Manifest Destiny and westward expansion, which established the American West landscape as the rightful property of the United States government.

"We are thrilled to work with Creative Time, Times Square Arts, and Governors Island Arts to bring Charles Gaines' monumental series to the city," said Rocío Aranda-Alvarado, program officer for Creativity and Free Expression at the Ford Foundation. "This initiative sheds an important light on our nation's past and offers critical perspective for those working to build a more equitable future."

“Governors Island is alive with dynamic arts and cultural programming, providing unforgettable and accessible experiences for New Yorkers. This powerful new work by Charles Gaines will serve to connect New Yorkers across the boroughs to the essential arts and cultural experiences that are a core part of Mayor Adams’ economic recovery blueprint,” said Deputy Mayor for Economic and Workforce Development Maria Torres-Springer. “I encourage all New Yorkers to experience the wide-ranging power of this project throughout the city.”

ABOUT CHARLES GAINES
A pivotal figure in the field of conceptual art, Charles Gaines’s body of work engages formulas and systems that interrogate relationships between the objective and the subjective realms. Using a generative approach to create series of works in a variety of mediums, he has built a bridge between the early conceptual artists of the 1960s and 1970s and subsequent generations of artists pushing the limits of conceptualism today. Gaines lives and works in Los Angeles. He recently retired from the CalArts School of Art, where he was on faculty for over 30 years and established a fellowship to provide critical scholarship support for Black students in the M.F.A. Art program. He has been the subject of numerous exhibitions in the United States and around the world, most notably a mid-career survey at the Pomona College Museum of Art and the Pitzer College Art Gallery in Claremont CA, as well as a museum survey of his Gridwork at The Studio Museum, Harlem NY, and Hammer Museum, Los Angeles CA. His work has also been presented at the 1975 Whitney Biennial and the Venice Biennale in 2007 and 2015. An exhibition of his work is currently on long term view at Dia:Beacon in New York. In addition to his artistic practice, Gaines has published several essays on contemporary art, including ‘Theater of Refusal: Black Art and Mainstream Criticism’ (University of California, Irvine, 1993) and ‘The New Cosmopolitanism’ (California State University, Fullerton, 2008). In 2019, Gaines received the 60th Edward MacDowell Medal. He was inducted into the National Academy of Design’s 2020 class of National Academicians and will be inducted into the American Academy of Arts and Letters in May 2022.