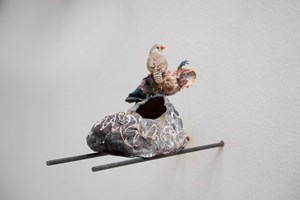 We talk with artist Valerio Nicolai and curator Matteo Mottin for more insight into the difference between vision and perspective, and the role of the audience.

The real target audience of Valerio Nicolai’s latest exhibition is a group of birds. Free to flutter through the exhibition space and to perch on paintings, these tiny, charismatic birds are the only ones with the full view, with the proper perspective to appreciate this show.

The tragedy, in this case, is that the birds are not aware that an exhibition has been mounted for their benefit. The people present are also spectators, but more so participants: movable elements, standing perpendicular to the floor’s painted surface.

It is evident that with this exhibition Nicolai is addressing the concept of pictorial composition from various visual angles - from up or down – and through motion – flying, walking, resting, etc. The title of the show, Permanent Transformation of a Magician in Ant, points us to our role model: someone who uses his laboriously acquired magical skills to adopt the perspective of an ant. This transformation invites us to consider a range of viewpoints, with the intention of revising the scope of our own, human, vision.

Valerio Nicolai: It might sound banal, but I think the human vision changed a lot in this last decade. Before, it was something quite mysterious. Now, it's somehow flat. In an animal's vision we can return to mystery, and mystery feeds life.

AD: What would you say is the difference between vision and perspective?

VN: That's a good question. Perspective is an invention, a human construction that has been segregating our glance since the Renaissance. It implicates a construction that you superimpose upon reality, in order to better plan how to change it. In order to return to pure vision, we should get rid of all these old axonometries, and start to look at the world as it really is. We often forget that straight lines don't belong to nature, and the horizon’s line is in fact an illusion.

AD: Your artworks were attempting to re-create environments that birds would be attracted to. Can you tell us more about the piece "Permanent Transformation Of A Magician In Ant", which gives the show its name? There is something oddly attractive about this piece in particular…

VN: I think that's because it's an actual place of transformation. That's where the magician turned into an ant. For this show, I was interested in working on two different and distant points of view: the one of the bird, who can see the whole show from above, maybe without understanding it, and the one of the human viewer, who cannot really see an artwork that also encompasses his presence as a part of it.

I initially thought that asking a magician to turn himself into an ant, in order to see the show at the same level of the canvas, was a right balance between these two points of view.

Unfortunately, something went wrong. Minutes before the opening, we found a one-legged grasshopper flying around the space, staying for minutes in front of the sculptures and strolling around the canvas on the floor. I don't know how to tell you this, but he looked sadly happy. At the end of the evening, we found out somebody eventually stepped on him.

AD: What struck you from the audience’s reactions? Audience, in this question, being either birds or people.

VN: The human audience was of course amazed by the birds. In a certain way, it was just like when people are going to an exhibition just to see who went to that exhibition. In this, I think we reached our goal, which was to put human being and animal on the very same level. I'm very happy about that.

AD: Matteo, what was your biggest challenge in curating this show? Or, rather, what are the difficulties in creating a show like this?

Matteo Mottin: The biggest challenge has been finding the right place for the show, and having real financial support to make this exhibition happen. I've been lucky to have found a great collaborator: Ramona Ponzini, who acts as a sort of "executive producer" for the arts. Together, we decided to found the non-profit association Treti Galaxie, and she had the idea to ask Sandro Mori to join us. Mori is a private banker, curious about the arts, who decided from the very first minute to support this "crazy" show. Ramona also managed the whole organization, from looking for the right materials for the set up, to finding the vet who took care of the wellness of the birds. She did a great job.

Working with Valerio has been amazing. He's a really professional artist. Even if his work at a first glance may seem casual and naive, he pays a lot of attention, even to the most minimal detail. We worked together on the setup of the displays for ten days, every day from the morning until late at night. I think for a curator it is more important to talk with an artist, to listen to his needs, than to read philosophy books and try to superimpose another person's thought upon the artist's work.

AD: Did you do any sort of preparation, in order to understand the particularities of this show’s audience?

MM: I'm writing this answer from my phone whilst sitting beside the big red painting hanging on the wall. It's late at night and the birds are sleeping on the canvas. It constantly amazes me how good they reacted to the whole installation.

Me and Valerio were working on this show for almost one year. I first saw his work during his residency at Viafarini, in Milan, and that very same night we started talking about how good it would be to see a bird landing on a painted canvas. Since the beginning, it was clear to us that we were going to make a show that was just for animals. In that period, I was reading books by Steve Baker, Giovanni Aloi, San Francesco D'Assisi, and Graham Harman, and I was really interested in finding a way to try to change the anthropocentric perception we usually have of an art exhibition.

AD: As a curator, you tend to focus on exhibitions that reimagine the role of the audience. In general, how do you see the relationship between the audience and the artwork, individually and within an exhibition as a whole?

MM: I'm not really interested in the audience. Artworks are meant to stay, people are meant to go. In my first show, featuring Martina Bassi, Michele Gabriele and Namsal Siedlecki, I built a sort of sonar that enabled the artworks to feel the presence of the viewer, who couldn't actually see the pieces because the space was almost completely dark.

With Scuola Civica D'Arte Contemporanea (in Iglesias, Sardinia), Pino Giampà and Eleonora Di Marino helped me to curate a show in a cave, in a secret place next to an abandoned mining village. The exhibition was meant to be seen only by objects, i.e. the artworks I put in the show, and no one else. Nobody actually saw it, and I'm quite sure it's still open, somewhere in Sulcis Iglesiente. I often think about that show and the people who helped me to set it up.

I then curated a solo show by Stefania Fersini at Casa Mollino, and people weren't that welcome also, since the museum allows only six people to enter at a time, and the opening itself lasted one hour and a half. The piece by Stefania is still on show, though, as a part of the permanent collection of the museum, but it's still quite hard to manage to see it.

People love to see exhibitions through their iPhone screens. I just try to give them what they love the most: a non-direct experience of reality.

By Maria Martens Serrano
Maria Martens Serrano is a Dutch-Salvadoran writer. She studied under a liberal arts program at University College Utrecht, going on to graduate with an MSc in Sociology from the University of Amsterdam. Exploring a broad range of interests, Maria previously worked with a news website and a human rights NGO, before becoming involved with several art fairs in the Netherlands. She now writes on topics of arts and culture. In early 2015 Maria joined the team of Artdependence Magazine as editor and contributor.