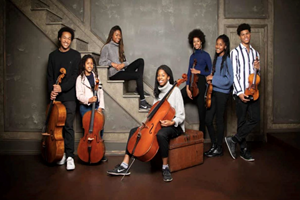 Britain’s most exciting classical music performers, Sheku Kanneh-Mason and the Kanneh-Mason family will be joining British High Commissioner H.E. Vicki Treadell for a reception in their honour.

Britain’s most exciting classical music performers, Sheku Kanneh-Mason and the Kanneh-Mason family will be joining British High Commissioner H.E. Vicki Treadell for a reception in their honour. The event at Westminster House, the High Commissioner’s residence in Canberra will celebrate this fantastic modern British talent with invited guests. It takes place on International Youth Day, 12 August.

Sheku Kanneh-Mason shot to global fame after his mesmerising performance at the wedding of Prince Harry and Meghan Markle in 2018. He won the BBC Young Musician award in 2016, and the first cellist in history to reach the top 10 of the UK album charts. Sheku is also one of seven siblings, all extraordinary instrumentalists, who have been described by Simon Cowell as the world’s most talented family.

I am delighted to welcome Sheku and the Kanneh-Mason family to Australia during their much anticipated tour and celebrate their extraordinary talent.

This exciting moment follows the UK-Australian Season of Culture, a huge creative and cultural exchange which sought to answer the question ‘who are we now’. The Kanneh-Masons epitomise the diversity, creativity and talent that exists across modern Britain.

"This is the largest tour the family has undertaken outside of the UK. I am very proud to be presenting these exceptional young British musicians, who are already winning the hearts of Australian audiences, with the critic for the respected Limelight magazine saying of their debut concert in Perth that the family’s performances are a must-see

This is the first Australian tour by Sheku and the Kanneh-Masons. Sheku will be joined by his sister Isata, now one of Britain’s leading young pianists, in a performance of greatly loved sonatas for cello and piano. In the second half of the program he will be joined by the entire family. The program will feature works by Schubert, Liszt, Mendelssohn, Shostakovich, Gershwin and other popular composers."