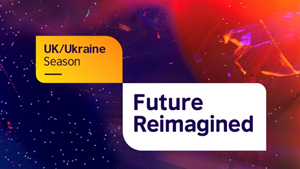 The British Council and the Ukrainian Institute recently launched the UK/Ukraine Season of Culture – a new programme of cultural activity to support the Ukrainian arts sector.

The British Council and the Ukrainian Institute recently launched the UK/Ukraine Season of Culture – a new programme of cultural activity to support the Ukrainian arts sector.

The season, which has been planned since 2019 to mark 30 years of diplomatic relations between the UK and Ukraine, aims to strengthen and build cultural connections between both countries, while providing new platforms and opportunities for Ukrainian artists to connect with the UK. With the ongoing war in Ukraine, the season’s theme is ‘Future Re-Imagined’, focusing on the changed needs and priorities of the Ukrainian sector, giving a voice to Ukrainian creatives, both in the UK and online.

It will see a programme of activity, events and grant-funded projects take place in the UK, online and across satellite locations, bringing together a diverse community of artists, creators and educators. It will also provide new opportunities for exchange, including through residences, talks, films and lectures.

The UK/Ukraine Season officially launches at Sheffield DocFest this evening, with a delegation of Ukrainian filmmakers and artists selected to present their documentary films, virtual reality and artwork, alongside a full Ukrainian documentary programme. The delegation includes some of the team of Docudays UA, the main human rights international documentary film festival in Ukraine, and Ukrainian filmmakers with projects in development and works-in-progress to be pitched to international industry representatives. Films that are part of the programme provide a powerful encounter with contemporary Ukrainian life – including the reality of the Russian invasion and the current war.

Other UK/Ukraine season highlights include The Times and The Sunday Times Cheltenham Literature Festival and the Kyiv Book Arsenal partnering for a special Ukraine Day event, celebrating emerging voices in Ukrainian literature; a Ukrainian to English Literary Translation Summer School at the British Centre for Literary Translation (BCLT), University of East Anglia, bringing together translators and authors; and a Ukrainian programme at the 2022 Huddersfield Contemporary Music Festival, focusing on contemporary Ukrainian opera and chamber music.

With much of cultural life in Ukraine suspended, the season will also support future Ukrainian artistic collaboration, through a series of grants worth up to £30K. These wide-ranging projects are the result of an open call launched in October 2021 and include the development of residencies for Ukrainian musicians and dancers; theatre pieces that examine Ukrainian political and cultural history; professional development opportunities for Ukrainian journalists; and collaborations with Ukrainian designers, photographers and digital artists for London Fashion Week.

“While the whole of Ukrainian society is affected by the Russian aggression, artists and creatives are among the most vulnerable groups. Ukrainian culture is a major target in this war, so it is particularly important to continue building networks and supporting the creative sector. The UK/Ukraine Season of Culture strengthens cultural relations between our countries and helps Ukraine to be better known and understood in the UK. "

“The UK/Ukraine Season offers a vital opportunity to nurture the important relationship between the UK and Ukraine. At a time of war, cultural connections can bring people together, and it’s our artists and thinkers who help us make sense of things. The British Council has always been committed to supporting the creative and cultural sectors in Ukraine but now there’s an even greater need. The war has had a devastating impact on Ukraine’s cultural sector, and we hope through this season, we can provide a platform for Ukrainian creatives to build relationships in the UK and beyond.”

Highlights of the Programme:

Alongside the season, the British Council will bring together stakeholders from education and arts in both countries to discuss and respond to challenges across sectors at Ukraine Day, a conference taking place in London on 1 July. Then on 26 August the Edinburgh International Culture Summit, together with the Ukrainian Institute, will convene a special Cultural Leadership Dialogue.

The UK/Ukraine Season of Culture will run until March 2023. To find out more and view the programme, visit the website ukuaseason.org/ or follow the hashtag #UKUASeason on social media.