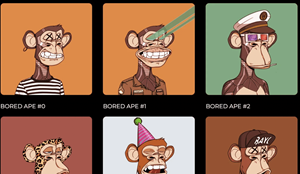 Yuga Labs, the startup behind the popular Bored Ape Yacht Club NFT collection, is in financing talks with Andreessen Horowitz, according to the Financial Times.

Yuga Labs is reportedly seeking to sell a multimillion-dollar stake in what would be a new funding round.

According to people described as having "knowledge of the discussions," the terms are subject to changes, and the talks may not necessarily lead to a deal.

Yuga Labs did not respond to the Financial Times' repeated requests for comment, and Andreessen Horowitz also declined to comment.

Bored Ape Yacht Club (BAYC) NFTs have proven to be one of the most popular NFT collections in the space.

BAYC owners gain access to an exclusive Discord server, and many BAYC owners have made use of Twitter's new initiative to flaunt their NFTs are their Twitter profile picture.

A multitude of celebrities ranging from Eminem and Jimmy Fallon to Steph Curry and Post Malone all own BAYC NFTs.

Eminem—who bought his BAYC NFT for $452,000 last month—will feature at this year's Super Bowl Half Time Show along with other BAYC holders and NFT enthusiast Snoop Dogg.

Earlier this month, Paris Hilton showed off her own BAYC on the Jimmy Kimmel Tonight Show—and even gave every audience member an NFT of their own.