Below the Surface: Three Modigliani Paintings Revealed for the First Time Thanks to Digital Radiography 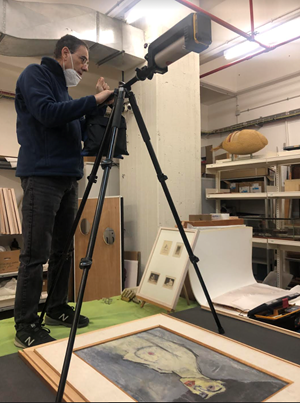 A unique painting by Amedeo Modigliani, on display at Hecht Museum in the University of Haifa, was recently analyzed by a portable digital radiography system. The X-ray revealed no less than three never seen before paintings hidden beneath the surface.

A unique painting by Amedeo Modigliani, on display at Hecht Museum in the University of Haifa, was recently analyzed by a portable digital radiography system. The process done by RTUtec, an Israeli company specializing in nondestructive testing, made it possible to see through the top paint layers. The X-ray revealed no less than three never seen before paintings hidden beneath the surface. 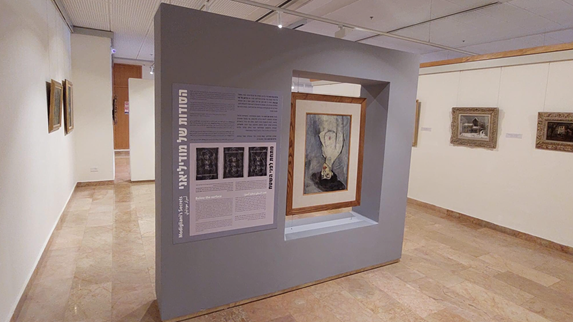 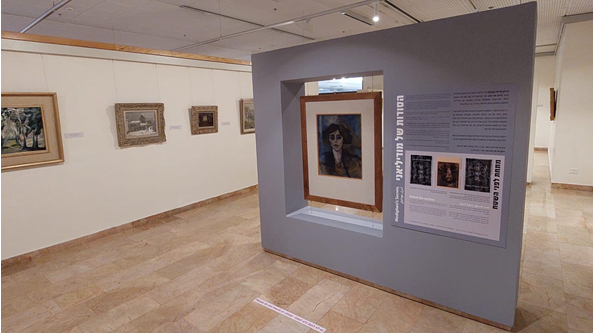 The canvas of one of Amedeo Modigliani’s masterpieces, on display at Hecht Museum, University of Haifa, harbors many secrets. The painting provides a unique glimpse into a particularly vibrant period in the history of art. This early work by Modigliani, was painted in 1908, two years after the artist’s arrival to Paris, which was then the epicenter of the art world. The poverty in which he lived together with his strong need to create, forced Modigliani to reuse his art materials and to paint on both the front and the back of the canvas. Nude with a Hat was painted on the front side of the canvas and on the back Modigliani painted the portrait of his friend Maud Abrantès. To paint the shoulder-length portrait of Abrantès, Modigliani not only turned the canvas on its back but also inverted it. This meant that one of the two figures was destined to always be hung on its head. In 2012, the former director and curator of Hecht Museum, Ofra Guri-Rimon, discovered another figure under the portrait of Maud Abrantès. Positioned upside down - a pair of blue eyes, the contour of a face, and an orange hat are visible in the area around Maud Abrantès’ neck and chest.

Both sides of the canvas are covered with turbulent brushstrokes and odd shapes that suggest an artist in the process of experimentation. To study what is hidden beneath the surface, the museum recently decided to X-ray the work with the help of a portable digital radiography system. Hecht Museum says that "in preparation for the exhibition ‘Modigliani Up Close’, that the painting is due to be shown at in October this year at The Barnes Foundation in Philadelphia, we wanted to learn more about the figure hiding under the portrait of Maud Abrantès. When we got the results of the X-ray, we couldn't believe our eyes! Three new figures, that were never seen before, stared at us from the computer screen." 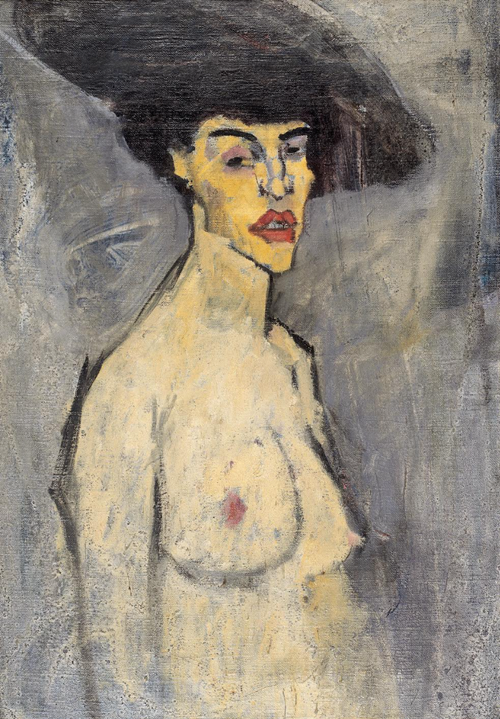 Underneath Nude with a Hat, the X-ray revealed a highly finished portrait, apparently that of a man, looking directly at the viewer. It is possible that Modigliani painted the hidden portrait himself or that he found or purchased a painting by another artist and covered it with his own work. The X-ray also showed another image, an outline of a head, that is positioned inversely underneath the nude’s stomach and chest. The shape of the head and what seems to be hair, as well as the short, rhythmic, vertical brushstrokes that appear in the center, are similar to what can be seen in Modigliani’s Woman with a Blue Scarf from 1907. On the other side of the canvas, under the partially seen face pained inversely to the portrait of Maud Abrantès, the X-ray revealed a sixth face, very similar and positioned close to the one visible in natural light. It seems more finished, with better-defined eyes, a nose, and full lips.

The story of the women, that Modigliani painted, is no less fascinating than the amazing discoveries revealed by the X-rays. The identity of the model in Nude with a Hat is unknown, but her striking features, including her slanted eyes, curved nose, and full lips, suggest that this was the same model who sat for The Jewish Woman, which Modigliani exhibited at the Salon des Indépendants in Paris in 1908. The Portrait of Maud Abrantès tells a richer and a darker story. In 2020, an article by Alessandro De Stefani revealed the true identity of Maud Abrantès. Her real name was Leontine Phipps, a wealthy American who spent a short but turbulent time in Europe. She married a handsome and charismatic Austrian nobleman, considered to be the most eligible bachelor in Paris. But their story was far from a romantic fairytale. The two became addicted to morphine, were hospitalized several times and lost all their money. They eventually divorced and Leontine returned to the U.S., while pregnant. From the ship to New York, she sent a postcard to Paul Alexandre, Modigliani's friend and patron, who also purchased the work from the artist.

Hecht Museum says that "this extraordinary painting is a tangible testament to a time in history that continues to fascinate scholars and art lovers. A time when Paris was the undisputed center of the art world, where many could break free from the shackles of tradition and dedicate themselves to creating and living according to the values of avant-garde and modernism". Prof. Ron Robin, the president of the University of Haifa, who also serves as chairman of the board of directors of Hecht Museum, adds that "the painting is considered to be the jewel in the crown of the art collection at Hecht Museum. Now we are happy to learn that it harbors many more treasures – some reveal themselves to an inquisitive eye and some ask for deeper research".