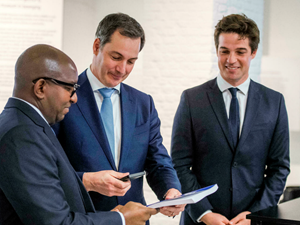 Belgium on Thursday gave the DR Congo an inventory of tens of thousands of art objects from the former Belgian Congo held in its colonial era museum, the latest step in the restitution of looted artefacts.

Belgium on Thursday gave the DR Congo an inventory of tens of thousands of art objects from the former Belgian Congo held in its colonial era museum, the latest step in the restitution of looted artefacts.

Belgian Prime Minister Alexander De Croo handed the catalogue to his Congolese counterpart Jean-Michel Sama Lukonde at a ceremony in the museum on the outskirts of Brussels held on the sidelines of an EU-Africa summit.

From the inventory, Kinshasa will be allowed to lodge, as early as this year, requests for restitution which will be examined by a Belgian-Congolese team of researchers soon to be in place, officials said.

“It is not only a transfer of objects but also of knowledge and experience necessary for the conservation of these elements,” he said.

The Royal Museum for Central Africa, opened in 1898 as a legacy of Belgian King Leopold II who administered the Congo as his personal property from 1885, contains one of the world’s largest collections of looted African artefacts.

The inventory covers some 84,000 objects — including sculptures, masks, utensils and musical instruments — that arrived in Belgium up to 1960, the year of the country’s independence. The stock represents about 70 percent of the museum’s collection.

De Croo urged Belgians to “not be afraid to look our past in the face”.

He recalled that in 2020 King Philippe had expressed “regret” for acts of violence and cruelty during the colonial period in Congo.