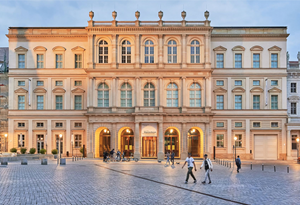 Following the incident on October 23 at the Museum Barberini, in which Claude Monet's painting Grainstacks was splattered with mashed potatoes, the museum's management has decided to close the museum for a short period until October 30, 2022.

Following the incident on October 23 at the Museum Barberini, in which Claude Monet's painting Grainstacks was splattered with mashed potatoes, the museum's management has decided to close the museum for a short period until October 30, 2022.

The background to this is the wish of museum founder Hasso Plattner to analyze the situation with national and international museum partners and lending institutions and to discuss the risks revealed by the recent attacks. In view of repeated attacks, the requirements for long-term and sustainable preservation of art in international museum operations are to be re-evaluated and adapted locally.

Ortrud Westheider, Director of the Museum Barberini: "The attack on a work of the Hasso Plattner Collection as well as previous attacks on artworks, among others in the National Gallery in London, have shown that the high international security standards for the protection of artworks in case of activist attacks are not sufficient and need to be adapted. We want to use the incident at our institution as an opportunity to establish a productive dialogue with international museum partners and jointly set the course to preserve art and cultural assets for future generations."

In the early afternoon of October 23, Claude Monet's painting Grainstacks in the Museum Barberini had been pelted with mashed potatoes. Fortunately, the painting was protected by glass and carefully sealed. Therefore, no liquid could penetrate and the painting remained unharmed. Thanks to the quick and prudent actions of the custodians and the Potsdam police, the perpetrators were taken into custody.