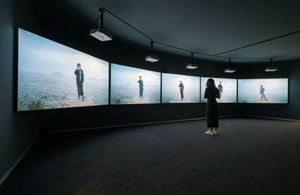 Aziz Hazara (Afghanistan) is the winner of the Future Generation Art Prize 2021, the 6th edition of the global art prize for artists under 35, established by the Victor Pinchuk Foundation in 2009.

Aziz Hazara (Afghanistan) is the winner of the Future Generation Art Prize 2021, the 6th edition of the global art prize for artists under 35, established by the Victor Pinchuk Foundation in 2009. The winner was announced by the international jury at the online award ceremony on 8 December. Aziz Hazara received a total of $100,000: $60,000 as a cash prize, and $40,000 to fund their artistic practice. 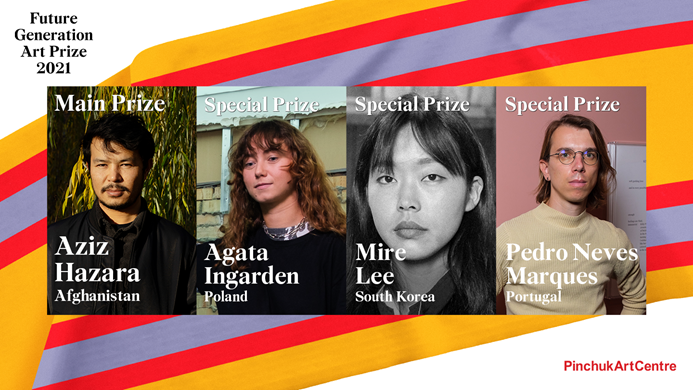 Addressing the young artists Victor Pinchuk, founder of the PinchukArtCentre and Future Generation Art Prize, said: “I’m really happy and proud that we are together tonight. It wasn’t easy in this challenging and crazy time. But my congratulations to everybody. You know this idea of the Future Generation Art Prize came to me in 2008 in the middle of the global financial crisis. Maybe for you – young artists – it would be useful to know and understand that crisis is a fantastic source of inspiration. Nobody can tell us better about this world than great, especially young, emerging artists. You can say about this world in the future much better than politicians can. My belief is that contemporary art is one of the most revolutionary forces in the world. That is why I think your role is so important. Ideas are created in your subconscious and through the object which you create, your ideas, your feelings, they can come to the subconscious of your viewers, visitors. And this way you can influence and help us to change this world. We can survive only if we change this crazy world with its very dangerous and unpredictable future.”

The jury unanimously granted the Future Generation Art Prize 2021 to Aziz Hazara. Commenting on his win, the Jury said:

"An exceptional and sophisticated multi-channel installation, Bow Echo stands as an ephemeral and compelling monument in our present moment. The 5-channel video work features five boys, one per screen, each pictured against the mountainous landscape of Kabul as they attempt to resist the wind while blowing a bright plastic toy bugle — a gesture of remembrance and mourning that doubles as an urgent call for attention to a perilous situation. In an original composition, their sounds compete with the wind and the din of nearby drones, alternately muffled and then breaking through, sliding in and out of a unified chord into dissonance. The piece holds many paradoxes in a simple scene: the playfulness of childhood, the limitlessness of grief, the conquest of land and territory, and the precarity of the future. In a sense, the piece identifies not only a future-facing tendency in art but a concern for future generations that was shared by many artists in this year’s Future Generation Prize. Touching on cinema, performance, and sound, Bow Echo offers a striking time-based monument to resilience and hope for a geography that has, for many generations, remained under the pressure of various forms of failed governance.  At the same time, the piece shows how artists continue to imagine complex independent ways of existence even amidst conflicts that seem never-ending."

Commenting on Agata Ingarden as the winner of the Special Prize, the Jury said:

"The jury recognizes the inventive work of Agata Ingarden in this ambitious project that explores the tensions between the desire for freedom and the strict rigidity and control of daily life. She embraces risk in her exploration of new mediums. In her practice, the work becomes a complex network of sculptural materials, spatial interventions, sound, and performative video. Her work claims and transforms the architecture of the gallery beyond the conventional boundaries of an artwork by modifying the walls and the ceilings and bringing windows from the outside inside. There are spillovers from the digital to the real and then back, creating a circularity that results in a layered installation that invites us, participants, to imagine and rediscover our own relations to body, desire and the spaces we live and work in."

Commenting on Mire Lee as the winner of the Special Prize, the Jury said:

"The jury recognizes the rigorous and thoughtful work of the sculptor Mire Lee (South Korea) who is known for biomechanical masses, previously made of concrete, silicon, and steel. As if pulled from an alternate world, or science fiction narrative, they are both dreadful and transfixing.  For her new large-scale installation House of Harlequins, 2020, commissioned by the PinchukArtCentre, Lee has built an elaborate structure composed of “formworks” – typical tools for modeling building facades  – that is regenerative: the molds are removed once dry and then reused over and over. As viewers move through Lee’s vessel, they feel enveloped in the churn of an organism, as it moves through successive half-lives in a continual state of obsolescence and reconstitution."

Commenting on Pedro Neves Marques as the winner of the Special Prize, the Jury said:

"In the jury’s view, Pedro Neves Marques’s film Middle Ages is a surprising and challenging reflection on an era of transition, marked by the rapid and constantly shifting evolution of our notions of body, gender, parenthood, reproduction and life itself. As in the previous works of theirs, Neves Marques addresses here, in a very direct but uncanny way, some of the most urgent and delicate issues raised by technological evolution and its effects on both interpersonal relations and the society as a whole."

All the shortlisted artists will take part in the Future Generation Art Prize 2021 @ Venice group exhibition organised by the PinchukArtCentre as an official Collateral Event of the 59th International Art Exhibition at Scuola Grande della Misericordia.

20 shortlisted artists have been selected from over 11,700 entries from almost 200 countries by an international selection committee. The collective Yarema Malashchuk and Roman Himey were automatically nominated to the shortlist as the winner of the PinchukArtCentre Prize 2020 – a national contemporary art prize awarded to young Ukrainian artists up to the age of 35.