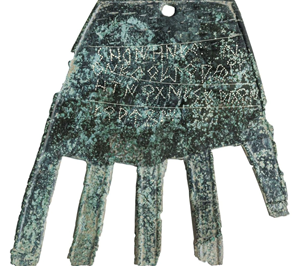 Archaeologists from the Aranzadi Science Society first uncovered The Hand of Irulegi in 2021. During the excavations of an ancient settlement at the base of Castillo de Irulegiko Gaztelua, near Pamplona, Spain.

The object dates from the 1st century BC during the Roman Sertoria Wars (80 to 72 BC), a period of conflict between a faction of Roman rebels (Sertorians) and the government in Rome (Sullans).

According to archaeologists, the hand was placed over a door for protection, but the settlement was burned and then abandoned, leaving the object buried in the ruins of a mud-brick house.

It is suggested that the hand was created by the Vascones, a pre-Roman tribe who inhabited a territory that spanned between the upper course of the Ebro River and the southern basin of the western Pyrenees.

It was previously thought that the Vascones had no proper written language (except for a few words), and only started leaving written text after the Romans introduced Latin.

A new study of the Hand of Irulegi has identified five Vasconic words across 40 characters, a discovery that upends much of what was previously known about the Vascones, and suggests that the object contains the earliest text in the Basque language, written in Iberian script.

The first word reads sorioneku, echoing present-day Basque-language “zorioneko”, a word that means “good fortune.” The word is accompanied by four other words whose meaning is not as apparent.

Experts now believe the inscriptions on the hand to be the oldest written example of Proto-Basque and the discovery, which they believe could lead to further discovery in learning a lot more about the Vascones.