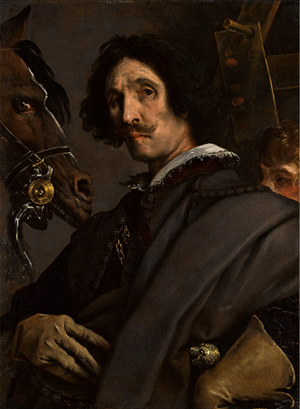 A temporary export bar has been placed on the painting ‘Self-Portrait as a Knight, with a horse, an easel with painter’s palette and a page’ by Pier Francesco Mazzucchelli also known as ‘il Morazzone’

A temporary export bar has been placed on the painting ‘Self-Portrait as a Knight, with a horse, an easel with painter’s palette and a page’ by Pier Francesco Mazzucchelli also known as ‘il Morazzone’

Self-Portrait as a Knight, with a horse, an easel with painter’s palette and a page’ by Pier Francesco Mazzucchelli, also known as ‘il Morazzone’, is at risk of leaving the country unless a buyer can be found.

The painting is an example of Lombard art, which has its origins in Lombardy in northern Italy during the early 17th century and remains a relatively unexplored field in art history. The style combines natural realism with intense spirituality and piety.

A work by il Morazzone is rare outside of northern Italy and this painting was presumed lost until its appearance on the London art market in 2020. A departure from the UK of this newly discovered self-portrait would amount to a significant loss.

There are no significant self-portraits by il Morazzone in any public collections in the UK, so this painting is a rare treasure. I hope that a buyer comes forward so that it can be studied and admired in this country.

The Minister’s decision follows the advice of the Reviewing Committee on the Export of Works of Art and Objects of Cultural Interest. The Committee agreed that this is an extraordinary and rare work from an important school of Italian painting notably absent from UK collections and the significance of this being il Morazzone’s only known self-portrait. As such, they agreed that the painting held importance for research into the social status of painters in 17th century Lombardy.

Committee Member Professor Mark Hallett said: "This is an unusually complex and fascinating picture that cries out for further research and analysis, both as a self-portrait of an important painter from the period, and as a work that illuminates the wider social and cultural dynamics of the 17th century Lombardy art world."

The painting, which for many years was housed in an English family collection, also has the potential to provide new and important perspectives on the collecting of Italian Baroque art in Britain.

The Committee made its recommendation on the grounds that the departure of the painting from the UK would be a misfortune owing to its outstanding significance for the study of Lombard painting during the baroque period.

The decision on the export licence application for the painting will be deferred for a period ending on 8th November 2022 inclusive. At the end of the first deferral period owners will have a consideration period of 15 Business Days to consider any offer(s) to purchase the painting at the recommended price of £2,000,000. The second deferral period will commence following the signing of an Option Agreement and will last for four months.