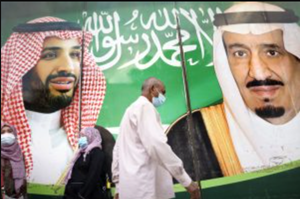 Dear President Biden, We the undersigned writers, journalists, creative artists, and supporters of PEN America, are writing to urge you to raise your grave concerns about the human rights situation in Saudi Arabia, specifically freedom of speech and artistic expression, with Crown Prince Mohamed Bin Salman when you visit Saudi Arabia in July 2022...

We the undersigned writers, journalists, creative artists, and supporters of PEN America, are writing to urge you to raise your grave concerns about the human rights situation in Saudi Arabia, specifically freedom of speech and artistic expression, with Crown Prince Mohamed Bin Salman when you visit Saudi Arabia in July 2022.

PEN America’s 2021 Freedom to Write Index, published in April 2022, identifies Saudi Arabia as the world’s second worst jailer of writers, second only to China. Twenty-nine writers are in prison because of their work and many more writers, journalists, and public intellectuals face harassment, violence or threats of violence, and other infringements of their human rights when they exercise their right to freedom of expression. Even those who leave Saudi Arabia are not safe, and Saudi writers and commentators who live and work abroad are subject to online trolling and threats, surveillance and hacking. The 2018 murder of Washington Post columnist, Jamal Khashoggi, is a tragic and extreme example of the targeting of writers by the Kingdom and the ongoing impunity for grave human rights abuses

Saudi Arabia  jails writers who criticize the Kingdom, Crown Prince Mohammed Bin Salman and their policies that harm human rights and free speech.  The government detains them for long periods of time, sometimes indefinitely, subjecting them to lengthy periods of solitary confinement and even torture.  In some instances, they are never charged with an offense.  Maha Al-Rafidi Al-Qahtani is a writer and trainee journalist at Al-Watan, a daily newspaper. She was arrested and detained without charge in September 2019 by armed men in a nighttime raid. She was kept in solitary confinement for two months in Sha’ar Prison, and is currently still being held without charge. Fadhel Al-Manasef is a blogger, writer, and human rights activist. He was arrested in October 2011 and sentenced in 2014 to 15 years in prison, a fine, and a 15-year travel ban enforced upon his release. Five months later, upon appeal, his lengthy sentence was confirmed and reduced by only one year to 14 years in prison, a fine, and a 14-year travel ban.

The vast majority of Saudi writers in PEN America’s Index have been jailed for more than five years. Raif Badawi, an activist and blogger, was imprisoned for more than ten years before he was released after the completion of this sentence on March 11, 2022. He was also flogged while he was in detention and is now subject to a travel ban.

We ask you not to be fooled by Saudi efforts to disguise the stifling of free speech, including through the release of a number of writers, bloggers, and activists in 2021. The vast majority were released under stringent conditions that continue to infringe their free expression rights, including prohibiting them from using social media or speaking to the press, travel bans, and suspended prison sentences. They cannot take up their professions and they all face serious repercussions if they breach the conditions of their release. So while they may be physically free, they are intellectually and professionally still in prison. Nouf Abdulaziz is an activist and social media commentator. She was arrested in 2018 alongside fellow PEN/Barbey 2019 Freedom To Write honorees Loujain Al-Hathloul and Eman Al-Nafjan. Nouf was imprisoned—and subject to lengthy periods of solitary confinement and torture—as part of the Saudi government’s brutal crackdown on individuals who raised their voices in defense of women’s rights in the Kingdom. In December 2020, she was found guilty in the Specialized Criminal Court on terrorism charges and sentenced to five years and eight months in prison. She was granted a conditional release in February 2021 and, like Ms Al-Hathloul, remains subject to a five year travel ban.

Your discussions with the Crown Prince and other Kingdom officials should feature robust discussion about human rights, free speech, and the rule of law, and include clear acknowledgement that the environment for free expression in Saudi Arabia remains extremely poor. We ask that you publicly call for the unconditional release of Maha Al-Rafidi Al-Qahtani, Fadhel Al-Manasef  and all writers and journalists in prison in the Kingdom. We also ask you to speak out about the impact of the draconian release conditions on Nouf Abdulaziz, Loujain Al-Hathloul, Raif Badawi, and everyone who has been subjected to abusive conditions, and call for the end to travel bans.

We encourage you to fulfill your commitment to placing human rights at the center of your foreign policy and to use this opportunity to make it clear to the Kingdom that the US will stand up for free expression and human rights.