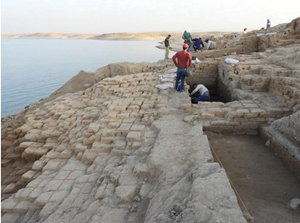 The remains of what is believed to be the ancient city of Zakhiku an important center in the Mittani Empire have resurfaced in the Tigris River after the water level of the Mosul Dam in the Kurdish region of northern Iraq dropped because of drought.

While such events are terrible for the environment and people, they can also throw up some surprises. Iraq is witnessing such a phenomenon, an ancient city that was believed to be lost forever has resurfaced.

The remains of what is believed to be the ancient city of Zakhiku an important center in the Mittani Empire have resurfaced in the Tigris River after the water level of the Mosul Dam in the Kurdish region of northern Iraq dropped because of drought. Mittani Empire is one of the least-researched empires of the Ancient Near East. It spanned from the eastern Mediterranean coast to the east of present-day northern Iraq.

The Mosul Dam was built in the 1980s and it had submerged the ruins of the archaeological site. Archaeologists first discovered Kemune in 2010, when water levels in the reservoir were low but it got submerged again before studies could be carried out there. In 2019, Zakhiku resurfaced again and a team of archeologists from Iraq and Germany began studying the remains. Before much could be done the city got submerged in the dam, only to resurface late in December due to another prolonged drought. 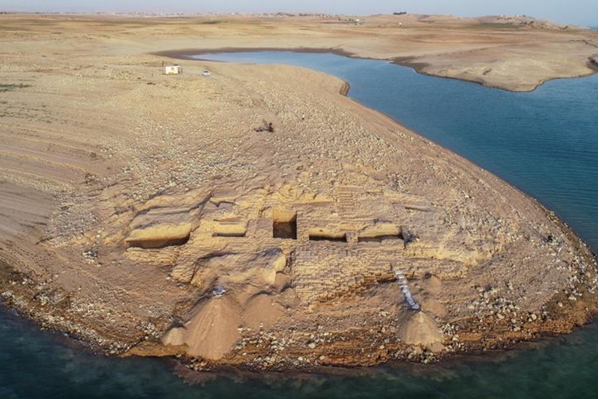 Discovering Zakhiku
In January and February of this year, archaeologist Hasan Ahmed Qasim from the Kurdistan Archaeology Organization in Iraq, along with fellow researchers Ivana Puljiz of the University of Freiburg and Peter Pfälzner from the University of Tübingen in Germany, set about mapping the mysterious city.

The team was particularly stunned by the well-preserved state of the storage building’s walls, considering it lasted through more than four decades of being underwater despite being made of sun-dried mud bricks. This unbelievable preservation was probably down to a 1350 BC earthquake, which collapsed the upper parts of the walls and buried the buildings in a shielded manner.

In addition to the palace that was uncovered in 2018, the researchers found some other interesting structures. These included a large fortification with a wall and towers, an industrial complex, and a huge, multi-story storage building, all dating back to the Mittani Empire.

"The huge magazine (storage) building is of particular importance because enormous quantities of goods must have been stored in it, probably brought from all over the region," Puljiz says.

"The excavation results show that the site was an important center in the Mittani Empire."
Of particular interest is the discovery of five ceramic vessels that contained an archive of over 100 cuneiform tablets. They date to the Middle Assyrian period, shortly after the earthquake disaster struck the city. Some clay tablets, which may be letters, are even still in their clay envelopes. The researchers hope this discovery will provide important information about the end of the Mittani-period city and the beginning of Assyrian rule in the region. "It is close to a miracle that cuneiform tablets made of unfired clay survived so many decades under water," Pfälzner says.