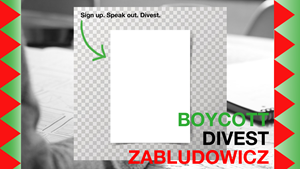 This coordinated act of withdrawal from Zabludowicz Art Projects and Zabludowicz Art Trust is part of the Boycott Zabludowicz Campaign (BDZ). Founded in 2014, BDZ actively aligns itself with the BDS (Boycott Divestment Sanctions) movement. BDS seeks to end international support for Israel’s oppression of Palestinians, and to pressure the Israeli State to comply with international law. BDZ was set up in response to the Palestinian Campaign for the Academic and Cultural Boycott of Israel (P.A.C.B.I.) first established in 2004.

The Zabludowicz Art Trust is directly connected to Tamares, a holding company initially established with money historically made from arms dealing and contracts with the Israeli Air Force, but which still currently has ties to property in illegally occupied Ma’ale Adumim, BICOM (Britain Israel Communications and Research Centre) and significant financial contributions to Conservative Friends of Israel, and is thus complicit in and reproduces the Israeli-state-led apartheid, which normalises the oppression of Palestinians. This complicity must end, whether through the Zabludowicz Art Trust permanently divesting from, and fully severing, its ongoing complicit relations with the Israeli state’s policies of apartheid and military occupation, or through the self-emancipation of Palestinians.

All withdrawals are made in full solidarity with Palestinian liberation. Artists and cultural workers stand together to oppose all attempts by the Israeli state to suppress resistance to, and silence critique of, the Israeli state’s ongoing violence towards Palestinian peoples. Whilst artists and cultural workers must name themselves publicly in order to deauthor or withdraw prior work from Zabludowicz Art Projects and the Zabludowicz Arts Trust, they do so as part of, and in full solidarity with, BDZ and BDS. Both BDS and BDZ seek to foreground the ongoing oppression of Palestinan life that drives the campaign, and work as collectively and anonymously as possible, in order to avoid detracting from this objective.

At the time of writing, the BDZ campaign has amassed over 600 signatories from individuals, organisations and institutions, who have pledged to boycott Zabludowicz Art Projects and the Zabludowicz Art Trust, and who stand united in solidarity with Palestine. BDZ welcomes new signatories who are keen to boycott and divest. Likewise, BDZ welcome contact with, and support from, other artists and cultural workers who are keen to join in this growing withdrawal of work and labour from the Trust.