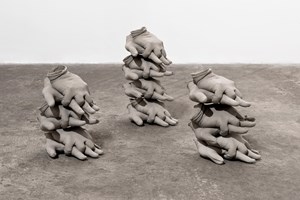 Ewa Axelrad’s works have rather a distinct quality; simultaneously managing to attract and discomfort the viewer. Whilst realising that one is confronted with ideas that will likely cause unease, there is something in the material and formality of the works that compels the viewer to keep staring.

Ewa Axelrad’s works have rather a distinct quality; simultaneously managing to attract and discomfort the viewer. Whilst realising that one is confronted with ideas that will likely cause unease, there is something in the material and formality of the works that compels the viewer to keep staring. These contradictory reactions are often taken one step further with a sense of excitement of discovery, as Axelrad presents concepts in a way that induces the viewer to look actively and take a different approach.

Axelrad’s practice is themed around topics that are not always considered ‘pleasant’, which she approaches with a thoroughly research-based mindset, but are yet repeatedly present throughout Western history; pressing topics including the bounding and interpersonal relationships within violent groups, the construction of masculinity, nationalism, and military aesthetics. Axelrad explores countless imagery in order to make the transition from research to the physical production of her artworks: when visiting her studio during the conception of a new project, one can see first-hand dozens of cut-outs, printed images, words hanging from the walls. Rather like a constellation of all the concepts she is cooking together at that time, these seemingly random selections of sources will eventually result in a new installation, photograph, sculpture or video.

Born in 1984 in Poland, Axelrad moved to London after finishing school, completing her MA in Photography at the Royal College of Arts in 2010. From there she focused on her art using a wide range of media, challenging her usual practice by testing new methods of production and finding new ways with which to incorporate her passion for research. Recent shows include the Zachęta National Gallery of Warsaw (where she was a nominee of the Deutsche Bank Foundation Award), Bold Tendencies in London, Tallinn Art Hall, the National Museum in Riga, and the Wrocław Contemporary Museum, among others, and she is currently completing a residency at Launch Pad LaB, France.

I don’t recall ever making this decision. I do remember, however, wanting to be a National Geographic photographer and that’s how I ended up studying photography.

I usually start working on a project when I have a burning set of questions that don’t go away. I tend to have some hypotheses which I test both through making work and by all sorts of research, including written texts on the subject. Finding out that someone else has made a similar hypothesis is one of the most exhilarating moments in the research process.

They’re definitely the latter. I try to avoid indulging in materials just for the sake of their appearance, there has to be a reason to use a specific material, I’m quite disciplined in that sense. It comes from a very personal place; I tried to come close to understanding the motivation of people from part of my family, my hometown, from my home country (Poland). I tried to understand how so many of them embrace the nationalist sentiment. I also tried to comprehend my own concurrent attraction and criticism towards the military aesthetics.

The most recent completed work I made was for an exhibition ‘Beyond The River’ produced by Albertinum Dresden in a place called Bad Muskau Park on Polish-German border. The park’s main feature is river Neisse, which became a dividing line between Poland and Germany in 1945. As a response to this place I made two pieces in dialogue with each other: a hard breakwater-like mass and a smaller sculpture based on a Belvedere Torso. The torso, despite looking solid, upon touch feels very soft and vulnerable as it’s made of very thin layer of silicone and is filled with air. It’s very wobbly which makes it feel like it’s filled with water. The forms of both pieces are a result of a research into the way the nationalist groups perceive their own bodies and how they view the bodies of others.

A bed. I don’t work efficiently without having an afternoon nap.

A city in general is my constant research ground. There is so much going on on the street level, the body language, individual and group behaviour, all sorts of dynamics played out in an urban environment. Since moving to London I became more streetwise and this led me to interest in peripheral vision as the one that is linked with fear and vigilance, both very important for my work. 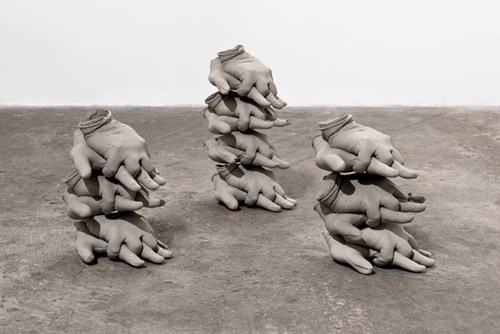 At this very moment I’m looking into territorial behaviour and aggression from the sociobiological perspective. It’s really refreshing to zoom out and look at our actions as an outcome of evolutionary adaptation. It’s just another way for me to understand nationalist sentiments, which I have been exploring in my work over the last year.

Overproduction. I’m no doubt contributing to it so it’s really tricky one for me to accept.

There are loads, but more than anything there is a quality in these artists that I admire which is searching new ways forward as opposed to settling on a successful formula.