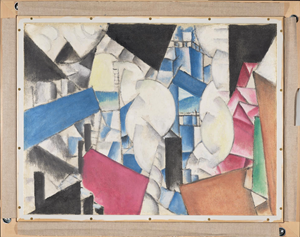 The Triton Collection Foundation has identified a work long hidden in its collection as an important painting by the renowned French artist Fernand Léger (1881-1955).

The Triton Collection Foundation has identified a work long hidden in its collection as an important painting by the renowned French artist Fernand Léger (1881-1955). Years of research and restoration have brought to light a canvas from the important Fumées sur les toits series of 1911-1912. The series marks a turning point in Léger’s artistic development, in which he made a radical departure from the style of his earlier works and moved from the relatively realistic and monochrome towards the increasingly abstract and colourful. This search ultimately led to his very recognizable cubist works.

Hidden Painting
In 1999, the Triton Collection Foundation acquired the painting Le quatorze juillet (Bastille
Day) (1912-1913) by Fernand Léger. Although a second painting was known to be on its
reverse side, this work was thought to be damaged beyond recovery. However, conservators
eventually succeeded in removing the hard, gluey layer on the painting. And thanks to
extensive research, restorer Gwendolyn Boevé-Jones was able to attribute this work to the

important series Fumées sur les toits (Smoke over the rooftops). In this series, Léger painted
the view from his studio across the Parisian rooftops, with plumes of smoke from the
chimneys, and in the distance, the Notre-Dame de Paris cathedral.

Turning Point in Career
When Léger painted the series Fumées sur les toits in 1911 and 1912, his career was at a turning point. In 1908, he made a radical departure from the style of his earlier work, in search of new artistic possibilities, inspired initially by Paul Cézanne. The view from his studio across the rooftops of Paris, with chimneys and plumes of smoke, inspired Léger to experiment with form and colour, moving from the relatively realistic and monochrome towards the increasingly abstract and colourful. This search ultimately led to cubist works like Contrastes de formes (1913-1914), made on the eve of the First World War. La partie de cartes (1917), a painting acquired by Helene Kröller-Müller for her collection between 1924 and 1928 and a high point in Léger’s oeuvre, is unimaginable without Fumées sur les toits. Léger himself would, incidentally, always consider Fumées an important moment in his career and it was also regarded as such by his circle.

An International First at Kröller-Müller Museum
For the first time in history, the newly discovered painting can be admired by the public at the exhibition Fernand Léger and the roofs of Paris at the Kröller-Müller Museum from 19 November 2022 until 2 April 2023. The Kröller-Müller Museum holds the largest cubist collection in the Netherlands. Using paintings and drawings by Léger, the exhibition Fernand Léger and the roofs of Paris demonstrates the development Léger experienced. The painting Fumées sur les toits, from the Triton Collection Foundation, is at the core of this. The broader context is formed by works of two groups of cubists in Paris: the group of Pablo Picasso and Georges Braque, who exhibited mainly in Daniel-Henry Kahnweiler’s gallery, and the group around Léger, who exhibited at the major Salons and also included Robert Delaunay, Jean Metzinger and Henri Le Fauconnier. A prominent work by Paul Cézanne will also be shown in the exhibition.
The guest curator for the exhibition Fernand Léger and the roofs of Paris is Sjraar van Heugten, former Head of Collections at the Van Gogh Museum and currently an independent art historian. In 2012, he published Avant-gardes 1870 to the present. The Collection of the Triton Foundation, a comprehensive study of the Foundation’s holdings, commissioned by the Triton Collection Foundation.

Publication on the Discovery
A publication on the discovery, in three languages (English, Dutch and French), will accompany the exhibition. Author: Sjraar van Heugten, with an essay by Gwendolyn Boevé-Jones.