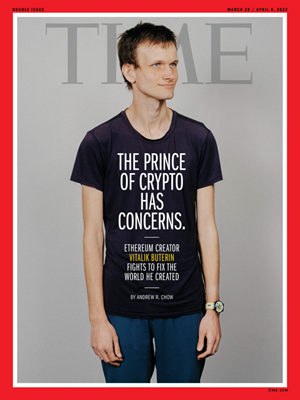 On Wednesday, March 23, TIME magazine is will release the first-ever fully decentralized magazine issue available as an NFT on the blockchain. The NFT issue features TIME’s cover story, The Prince of Crypto Has Concerns, on Vitalik Buterin’s fight for the future of Ethereum.

On Wednesday, March 23, TIME magazine is will release the first-ever fully decentralized magazine issue available as an NFT on the blockchain. The NFT issue features TIME’s cover story, The Prince of Crypto Has Concerns, on Vitalik Buterin’s fight for the future of Ethereum by Andrew Chow, editor of TIME’s Into the Metaverse newsletter.

The issue is created in partnership with the LITDAO. LIT is a web3 cultural currency and NFT project that conceived and created the first fully decentralized book earlier this year. The magazine will live on the blockchain but is hosted through a decentralized protocol allowing holders to read the magazine in its entirety through an interactive NFT. TIME will airdrop the NFT issue to select TIMEPiece and genesis LIT community wallet holders, which was made possible with the support of Circle.

Circle, a global internet finance firm that provides internet-based payments and financial infrastructure to businesses of all sizes, and the sole issuer of USD Coin (USDC), is the presenting partner for the first-ever magazine to be published on the blockchain. Transient Labs served as the project’s technical partner.

The announcement comes on the heels of a blockbuster first year for TIME in the web3 space, which have emerged as exciting new businesses from TIME’s initial foray in March 2021. To date, TIME’s web3 evolution has generated more than 10 million in revenue, curated a passionate community of over 25,000 artists, collectors and enthusiasts – of which, over 5,000 TIMEPiece holders have connected their digital wallets to TIME.com for frictionless access to the site.

Keith A. Grossman, President, TIME stated: “As TIME continues to push the boundaries as to what is possible within the web3 ecosystem, producing the first-ever full magazine on the blockchain seemed like a natural extension for our brand and we knew this issue, in particular, would be cherished by our community.”

It was also announced today that TIME has hired its first-ever VP of web3 Operations, Will Ban, who joins from Artsy, where he was the VP of Secondary Marketplace. Ban will focus on operationalizing TIME’s web3 vision, building out its support of Creators and Artists, Collectors and Community, CMOs and Brands, as well as the further development of television shows based on IP from the web3 community.