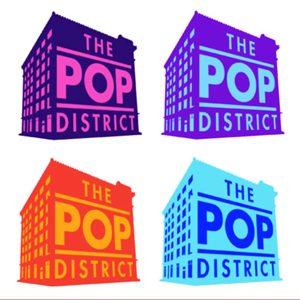 The Andy Warhol Museum has announced that the museum will spearhead a major new cultural and economic development project that intends to transform a six-block section of the museum’s neighborhood on Pittsburgh’s North Shore into a thriving hub for expansive cultural programming, creative workforce development and ultimately a new cultural tourism destination.

The Andy Warhol Museum has announced that the museum will spearhead a major new cultural and economic development project that intends to transform a six-block section of the museum’s neighborhood on Pittsburgh’s North Shore into a thriving hub for expansive cultural programming, creative workforce development and ultimately a new cultural tourism destination. To be known as the “The Pop District,” the project aims to use the power of public art, digital media production, live music and performance to create a museum-led destination in the city where Andy Warhol was born. Patrick Moore, The Warhol’s director and leader of the project, states, “Andy continues to be emblematic of the American entrepreneurial spirit—a true agent of influence and change. We now have the plan and resources to follow suit as an agent of change for Pittsburgh and an example of how creative communities throughout the country can be activated to boost and sustain a local economy through focusing on opportunities and experiences for young people.”

The physical and programmatic expansion of The Warhol will be the catalyst for creative placemaking and economic transformation through the arts. Dr. Steven Knapp, President and the CEO of Carnegie Museums of Pittsburgh, parent organization of The Warhol, explains the project’s impact: “The Pop District will demonstrate the role that museums can and must play in their communities by serving as centers of innovation and catalysts of economic development. This new district on the North Shore will also complement and amplify the vital role of Pittsburgh’s Cultural District, to which it is directly joined by the Andy Warhol Bridge.” The response to the project already has been favorable, as The Warhol has secured significant support from the Richard King Mellon Foundation and the Henry L. Hillman Foundation, and has the endorsement from city, state and local community groups.

Sam Reiman, Director of the Richard King Mellon Foundation, said, “The Warhol team’s innovative strategy will make Pittsburgh a national leader in creating new cultural models for American cities. The Pop District will effectively complement our beloved Cultural District across the river and create a powerful engine for contemporary economic development, and a magnet to attract and retain young creative talent. The goal of this project is to make sure the next Andy Warhol doesn’t have to leave Pittsburgh to become Andy Warhol.”

“The Warhol knows that art can change lives and art can change cities,” said David K. Roger, president of the Henry L. Hillman Foundation. “With The Pop District, that change is coming by bringing arts programming and workforce training outside the museum’s walls to create a six-block cultural destination on the North Shore. This is an outstanding opportunity for Pittsburgh’s growing creative economy and further underscores The Warhol’s reputation as a global leader in arts innovation.”

Based on research conducted by consulting firm Chora Creative, which assisted in a two-year planning process for The Pop District, The Warhol projects that the economic and quantitative impact of the district will include over $100 million in annual economic activity and 50,000-70,000 new visitors to Pittsburgh’s North Shore each year, and a new model for how a museum can positively impact its community.

The Pop District is estimated to be a $60-million, two-phased project that will roll out over 10 years. Phase One (through 2024) includes securing $30–$40 million in funding (already in its final stages); developing new education programs outside of the museum; a public art component (activated in May with a public mural titled Over The Rainbow by Miami-based artist Typoe and an exterior installation by artist Michael Loveland titled Social Sculpture, also of Miami); and innovative partnerships and real estate investments. Additional public art installations by two Pittsburgh-based artists, scheduled for completion this summer, is also underway. Phase Two (beginning in 2024) will include additional fundraising as part of a capital campaign across the entire Carnegie Museums of Pittsburgh, comprised of four museums including The Warhol. Phase Two will also feature construction with a new flagship live performance venue for concerts, performances, events and community rental spaces.

Creative talent development via education and hands-on digital media experience is a hallmark of The Pop District and key to its success. This approach enables The Warhol to take its longstanding experience in working with diverse young people to a new level through a custom-designed workforce development program. The Pop District workforce program involves equipping a diverse group of young people (ages 14-25+) with the skills necessary to thrive in the creative economy. Taking its inspiration from Warhol’s legendary Silver Factory and the Pop artist’s early career as a commercial illustrator, the workforce development program will produce creative products such as social media content for the museum and outside clients. Through producing media and art projects, participants will learn the skills necessary to thrive in the digital world.

The Pop District workforce comprises four cross-pollinating branches: a creative agency, a creative entrepreneur lab, a digital marketing certificate program and a youth empowerment program. Goals include matriculating 100+ program participants annually; creating $1 million in annual income for creative talent; creating 25+ annual full-time and part-time jobs as well as “gig” work and internships; bringing on 8-10 regional and national clients; and working with a majority BIPOC/LGBTQ+/immigrant workforce. In order to provide the professional guidance and framework for these programs, The Warhol is partnering with regional creative enterprises including Built Different Creative and Look Creative.

The purpose of The Pop District is closely aligned with the goal of Carnegie Museums of Pittsburgh to “turn the museums inside out,” thereby creating institutions that are more welcoming and relevant to real needs in the community. Many foundations and donors have been enthusiastic in their response to The Warhol’s plan. The Richard King Mellon Foundation is the lead funder of The Pop District, committing $15 million over the next three-and-a-half years, while the Henry L. Hillman Foundation has committed $10 million over four years. Discussions are underway with an array of other potential funders.

And the support of all Warhol staff and Carnegie Museums of Pittsburgh President & CEO Steven Knapp and their advisory board.

The master plan was completed in collaboration with the Washington, D.C.-based design firm, SmithGroup. Additionally, The Warhol worked with the Washington, D.C.-based museum consultants, Chora Creative, to collect and analyze two years worth of research, interviews and market data to determine that a live music and event venue will be a key, revenue-generating feature.