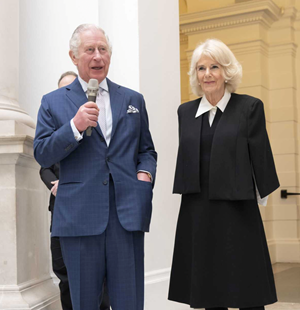 The Prince of Wales and The Duchess of Cornwall made a special visit to Tate Britain today, to mark the 125th anniversary of the gallery’s founding.

Their Royal Highnesses The Prince of Wales and The Duchess of Cornwall made a special visit to Tate Britain today, to mark the 125th anniversary of the gallery’s founding. The visit comprised a tour of its current exhibitions and displays, and a meet-and-greet with staff from across the gallery. Their Royal Highnesses were greeted by Maria Balshaw CBE, Director of Tate; Roland Rudd, Chair of Tate’s Board of Trustees; Dame Jayne-Anne Gadhia, Senior Independent Trustee; Alex Farquharson; Director of Tate Britain; and Vicky Cheetham, Managing Director.

Ahead of the forthcoming Platinum Jubilee celebrations, Her Royal Highness viewed a group of archive photographs by Nigel Henderson documenting street parties in celebration of Her Majesty the Queen’s coronation in 1953. His Royal Highness visited Life Between Islands: Caribbean British art 1950s – now with the exhibition’s curators Alex Farquharson and David A. Bailey MBE, and featured artist Sonia Boyce OBE, who is representing Britain at the 2022 Venice Biennale. Opening to critical acclaim last December, this landmark show explores the extraordinary breath of Caribbean-British art over four generations spanning film, photography, painting, sculpture, and fashion.

Her Royal Highness also met a group of Tate Collective Producers: a network of young people who help lead and shape the Tate Collective membership scheme and Tate's wider programmes. A phenomenal success since its launch in 2018, Tate Collective has attracted over 200,000 participants - and builds on the museum’s long-standing work with younger audiences. The Duchess heard about their preparations on the Late at Tate Britain programme.

Their Royal Highnesses additionally met with Sir Steve McQueen CBE, who is launching a book documenting his recent Year 3 exhibition with Tate Britain. One of the most ambitious portraits of children ever undertaken in the UK, his new publication will ensure its legacy. The visit also included a tour of historic works in Tate’s collection including a recently opened display of John Singer Sargent’s portraits and its Turner galleries.

The visit concluded with a meet-and-greet in Tate Britain’s iconic Rotunda with Tate’s wider operational and visitor experience teams in which Director of Tate Maria Balshaw, paid testimony to the creativity, hard-work, and dedication of every staff member who has been part of Tate’s extraordinary 125-year-history – and praised their vital work bringing the enjoyment of art to the public.

His Royal Highness said a few words to staff before leaving, including: “We are enormously grateful for the work that you do, and how you have managed to keep things going through the pandemic. It must be encouraging to see people coming back again and making the most of this remarkable cultural treasure. I hope that the next 125 years are even more successful. Thank you and a very happy birthday.”