The Peak of Tension with Sergey Melnitchenko "At the peak of tension, we desire to understand. At this point, there comes an awareness of the moment where calendar days, affairs and meetings, loved ones and enemies all crumble into a heap, mingling with one another. A state resembling vestibular dizziness in the sensation of imaginary movement, the fall and swaying of oneself and surrounding objects in space".

Sergey Melnitchenko, a young Ukrainian photographer (b. 1991) took his first shots in 2009 after receiving a digital camera from his parents as a gift. Sergey took to the street with his camera, and later on switched to portrait photography. Since 2012, Melnitchenko has been actively participating in exhibitions in Ukraine and abroad, but it was the Leica Oskar Barnack Newcomer Award 2017 for his “Behind the Scenes” series that brought him the most recognition.

Once, as a member of a Chinese dance troupe, Melnitchenko had a unique opportunity to immerse himself in the backstage world of theatre, and to capture some very personal and psychologically charged moments. The unnaturally vivid shots, contrast the wretchedness and hardships that the troupe underwent off-stage. Challenging make-up and bright costumes made the dancers themselves appear like tortured mannequins. The series showed manifestations of human emotion and darkened atmospheres, which were of no interest to the audience of holiday goers seeking entertainment. 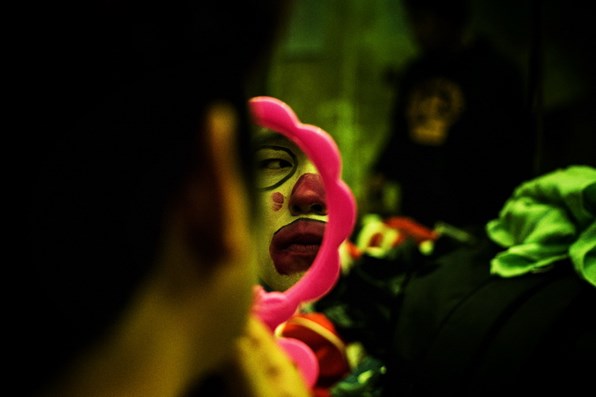 For his latest project “Only Now Only Never" Melnitchenko collaborated with Roman Mikhailov, a well-known Ukrainian artist, where he produced work of a completely different style: delicate, fuzzy, black and white images filled with fantasies and warm memories, a search for a dream to overcome the peak of tension of the present moment.

ArtDependence talks with Melnitchenko about creativity, the naked body, photo books and his new project the Mykolayiv Young Photographers Collective. Behind the scenes, copyright Sergey Melnitchenko

ArtDependence (AD): Sergey, what prompted you to explore photography professionally? What were the stories you told in your period as an amateur photographer?

Sergey Melnitchenko (SM): I came into photography through a very funny story actually. In 2009 I got my tongue pierced. When I showed it to my parents they were shocked and asked me to take it out, and instead they bought me my first small digital camera. From that time on I’ve been a photographer. I was only 17. I love this story. I think it was a game of faith. I took a lot of street photos back in the days of my first encounters with photography. And then between 2009-2011, I began to make a black and white portrait series on film camera. SM: It is a growing culture and it is becoming more serious. We have a lot of photographers we can identify as Ukrainian. It’s possible to notice particularities belonging photographic styles originating from different countries.

AD: Your series "Behind the scenes" brought you the Leica Oskar Barnack Newcomer Award 2017 and, as a result, world fame. Why do you think this series had such an impact? Was it difficult work?

SM: I can’t explain why this series was so successful. I can say that it was amazing experience to work on this kind of project. It was new territory for me. AD: In your photos you often emphasise the beauty and aesthetics of the naked body. Is the image of man of paramount importance to you?

SM: I like to work with the nude body and to show the beauty of it, yes. But it’s not all about the aesthetics of the end product. I also love the process and enjoy witnessing the reactions of people when they view the work. Every detail in contemporary art has its own importance; it isn’t only about natural beauty, that’s not interesting enough. Work needs to be shocking and strange. It needs to be less comprehendible than before. Time goes forward and we must advance with it.

AD: How do you produce your series: do you know in advance exactly what the final result should be, or is this a field for experimentation and improvisation?

SM: Everything depends on the specifics of the project. Most of the time, the final outputs of a project differ greatly from my original starting points/ideas. Usually there is a lot of experimentation, especially in my recent work processes. 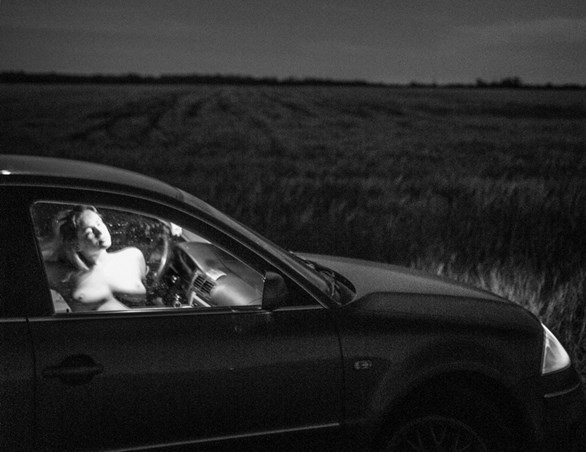 AD: What is your latest project “Only Now Only Never" about?

SM:It’s a duo exhibition of my collaboration with amazing artist Roman Mikhailov. We combined Mikhailov’s work and photos from my new series “her”. “her” is a surrealistic series where my wife is presented as the heroic protagonist. At the peak of tension, we desire to understand. At this point, there comes an awareness of the moment where calendar days, affairs and meetings, loved ones and enemies all crumble into a heap, mingling with one another.  A state resembling vestibular dizziness in the sensation of imaginary movement, the fall and swaying of oneself and surrounding objects in space.  Here it becomes nauseating, cramped and one must ground oneself in order to save oneself from total collapse.  Consciousness seeks comfort in memories and in creating plans for the future.  These thoughts are nothing more than a list of everything that I have acquired, and the upcoming opportunities to seize yet more. They only create the illusion of stability.  Our agitating consumerist desire to be confident in the future, will never allow us to see the present. AD: Are there topics that are too taboo for you?

SM: I don’t think so. I simply have themes that I’m interested in, or not.

AD: What is most interesting for you in photography that another medium doesn’t convey? Would you like to expand to work with other forms of artistic expression?

SM: The process, it’s not about the expression. I love the processes and enjoy speaking about them. Creating the ideas, planning the shootings, or the spontaneous moments of creating a story, here and now. As I did in my last project “who’s here?”. I would love to try working as a cinematographer/movie maker and produce an entire movie.

AD: Tell us about your recently founded Mykolayiv Young Photographers Collective. Does it exist on Facebook only? Who can join, and what are the admission requirements?

SM: MYPH - Mykolayiv Young Photographers Collective; a collection of bright and promising representatives of conceptual art photography which I curate.

“What are we doing?” Despite the fact that each of the collective’s artists are individuals who’s artistic interests vary greatly in theme, genre and visual language, our plans and ambitions are to work collaboratively in realising projects that are dedicated to sensitive issues. We aim to create works that spark public interest and to showcase them in gallery spaces, festivals and art fairs.

Right now, we are working on a new project that we will show throughout Ukraine and Europe. We’re selecting artists and photographers from Mykolayiv. AD: The production of photo books is becoming a particular part in the career of a photographer. How do you approach this field and how important it is for an artist in the digital world?

SM: For me it’s important to somehow finalise your project and make it more easily available for your audience. We have a huge amount of book competitions, awards, festivals and so on, so yes – it’s very important and great way to speak promote yourself in the art scene. And of course it’s a story, the story of each author to be told for many years ahead.

It’s an amazing pleasure when people hold your books in their collections!