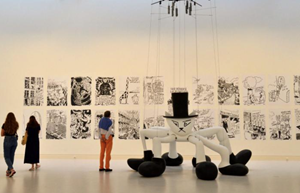 There will be “a closure of two days a week instead of one day with also time slots adapted to attendance”, detailed the city councilor during a press conference devoted to the price increase of the energy and its consequences for the city.

The city of Strasbourg will close its museums two days a week and reduce their opening hours, “a measure to adapt the local public service” in the face of the crisis. There will be “a closure of two days a week instead of one day with also time slots adapted to attendance”, detailed the city councilor during a press conference devoted to the price increase of the energy and its consequences for the city.

“I want our museums to remain accessible,” continued Ms. Barseghian, who refused to increase the price of admission tickets for visitors. “From a financial point of view (…), some cities do it. We have an entry price of 7.5 euros, and in some cities it’s double. But that’s not my choice” , she added.

In detail, and according to a letter from the town hall made public by the site of the UNSA union of Eurometropolis agents, the eight museums managed by the city will close from October 3 either on Monday and Wednesday, or on Tuesday and Thursday.

Hours will also be reduced, with closure between 1:00 p.m. and 2:00 p.m. on all opening days. “When we see that there are few people, it may be at these times that the equipment is closed”, continued Jeanne Barseghian.

However, the museums will remain open six days a week during major exhibitions, and will honor the mediation appointments, set in particular with schools.

In a press release, the city recalls that 670,000 visitors visited its museums and historical monuments before the Covid crisis, but that this reduction in working days contributes to the “good management of public resources (…) in the context of national and international crisis strongly affecting the budget of the communities”.

Mentioned in mid-August without being confirmed, these measures had raised questions about the cultural policy of the city in the ranks of the unions and the municipal opposition.

An online petition, deploring that Strasbourg, “7th tourist destination in France”, is “the first metropolis in France to take such a decision”, launched by the former mayor of the city (Agir) Fabienne Keller, and the deputy of Bas-Rhin, Bruno Studer (Renaissance), collected nearly 2,000 signatures in a few days.

On Wednesday afternoon, the CGT Territorial de Strasbourg-Eurométropole called the staff to a one-day strike on Saturday September 17 to protest against the measure. “It’s a reduction in the public service and the cultural offer of the city”, denounced Karim Hadi, representative of the union at AFP, according to whom the “agents were not really consulted”.

“The previous municipality (that of the socialist Roland Ries, editor’s note) had eliminated 17 posts, this one freezes retirements… We must stop this policy”, he added.