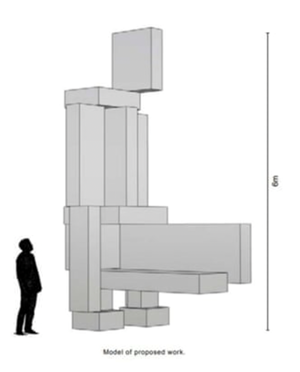 University students at Imperial College London are battling to prevent the installation of new sculpture by Antony Gormley over concerns that the work is “phallic”.

University students at Imperial College London are battling to prevent the installation of new sculpture by Antony Gormley over concerns that the work is “phallic”.

Alert, a six-metre-high stack of cantilevered steel blocks meant to resemble a squatting human figure, is scheduled to be installed in the university’s newly built Dangoor Plaza in South Kensington this summer.

According to Gormley, the sculpture represents a figure “balancing on the balls of the feet while squatting on its haunches”.

But a motion released by the Imperial College Union says the sculpture may “hurt the image and reputation of the college” because of its “obvious” interpretation as a person baring their erect penis.

Under this interpretation, the motion adds, the phallus extends “approximately three metres horizontally”, about half the total height of the artwork.

“While the artist’s intended form may ‘[evoke our] community of scientific research’ the phallic interpretation does not. The name Alert could also be understood as referring to the statue’s phallus being erect,” the union said.

They also claim students were not consulted about the installation, which will serve as a centrepiece of an area used by students, staff and the public. They note that while there is “nothing inherently wrong with phallic imagery in art”, the phallic interpretation’s preoccupation with the penis could be considered inappropriate for a grand public display.

One of the key concerns for the union was the “exclusionary” phallic interpretation, when scientific research has been beset with issues around gender ratio and inclusion. Official university statistics show that only 41.8% of the full-time students at Imperial College were female in the 2020-2021 academic year.

“College publicity regarding the statue chose an angle that avoided making the statue appear phallic,” the motion added. “This suggests that this interpretation, and backlash, was not unforeseen by some individuals within the college”.

The sculpture was given to Imperial College by the alumnus Brahmal Vasudevan and his wife, Shanthi Kandiah.

In a statement about the work on the university’s website, Gormley said he wanted to explore the correlation between people and their environment.

“Through the conversion of anatomy into an architectural construction I want to reassess the relation between body and space,” he said. “Balancing on the balls of the feet while squatting on its haunches and surveying the world around it the attitude of the sculpture is alive, alert and awake.”

Vasudevan said he shared the College’s “vision for a vibrant public space” and was “proud to bring this iconic, world-class piece of art” to the heart of campus.