SEEING LOUD: Basquiat and Music at The Montreal Museum of Fine Arts (MMFA) 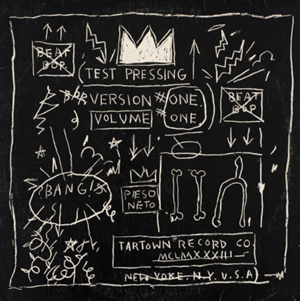 The Museum of Fine Arts of Montreal (MMFA), in collaboration with the Musée de la musique – Philharmonie de Paris, invites visitors to immerse themselves in the visual and musical landscape of the phenomenal artist Jean-Michel Basquiat (1960-1988).

The Museum of Fine Arts of Montreal (MMFA), in collaboration with the Musée de la musique – Philharmonie de Paris, invites visitors to immerse themselves in the visual and musical landscape of the phenomenal artist Jean-Michel Basquiat (1960-1988).

On view from October 15, 2022, to February 19, 2023, Seeing Loud: Basquiat and Music offers an in-depth look at the powerful connections between music and the artist’s life and work. The first exhibition ever to focus on the role of music in Basquiat’s artistic practice, the show explores his art in relation to the New York music scene of the 1970s and 80s. It introduces visitors to the sounds he incorporated into his painting – from opera to jazz to hip-hop – and to the musicians who inspired him. A feast for the eyes as well as the ears, the exhibition brings together over a hundred works in addition to many audio clips, videos exhibited for the first time, notebooks and rare archival materials.

SEEING LOUD: BASQUIAT AND MUSIC
More than merely a soundtrack to his life, music was manifest in Basquiat’s art as sign, symbol and sound. Seeing Loud: Basquiat and Music is the fruit of unprecedented research offering privileged insight into the artist’s complex musical universe. An American born to Haitian and Puerto Rican parents, Jean-Michel Basquiat had a meteoric artistic career.

Beginning with an exploration of the music that shaped Basquiat’s New York in the 1970s and
1980s, Seeing Loud: Basquiat and Music turns attention to the performative aspects of his practice and sheds new light on the extent to which music shaped his artistic output. A music lover to his core, Jean-Michel Basquiat possessed an impressive collection of more than 3,000 records and was a performing musician himself, notably with the experimental band Gray, of which he was a founding member.

“Jean-Michel Basquiat’s art is loaded with sonic charge,” explains Mary-Dailey Desmarais, Chief Curator of the MMFA and curator of Seeing Loud: Basquiat and Music. “Words, instruments, signs and symbols collide in compositions that sound – and sound loud – as we see them. They are distillations, reincarnations and even incantations of the phonics of the New York City streets, of hip-hop and bebop, of the Black Atlantic, Beethoven, Ravel and more.

Through the music in his work, Basquiat celebrated Black artistry and tackled the complexities and cruelties of history, bringing to life the sounds that inspired him and the soul of his historical moment.”
The exhibition also looks at Basquiat’s compositional techniques as they relate to music, and references his ties to particular record labels, musicians, cultures and sounds, thus providing a comprehensive picture of the multivalent registers through which music functioned in his work. His love of music in all its forms – opera, classical, hip-hop, jazz and especially bebop –inspired and structured his artistic practice. Musical instruments abound in his oeuvre, as do
references to a range of genres. A multidisciplinary and prolific artist, Basquiat collaborated
on several videos, produced a single and designed flyers announcing concerts in New York
during one of the most creative periods in the city’s musical history. Music was not only a
structuring element of his art but also a means through which he engaged with the thematics
of the African diaspora, the politics of race in the United States, and the history of Black
musicality. Basquiat absorbed the sounds and culture that were all around him and made
them part of his paintings, creating a unique artistic language that resonates powerfully to
this day.

“The key to deciphering Basquiat’s oeuvre and understanding its evolution lies in music. The artist always surrounded himself with sounds, and found himself at the confluence of two major musical movements of his time – no wave and hip-hop – that resonated with his creations. Jazz was a major source of inspiration for him, as were the blues and vernacular forms of Black American music, which he integrated into his paintings and which had a profound influence on his artistic practice, both formally and thematically,“ explains Vincent Bessières, guest curator for the Musée de la musique – Philharmonie de Paris.

“Music was always the focal point of Basquiat’s life and his art. He created spaces of knowledge with his copy-and-paste method that shows similarities not just to the composition and performance methods of hip-hop’s sampling and scratching, but also the improvisations in jazz and the aleatoric composition of John Cage. Basquiat’s works appear like a ‘language of rupture,’ a concrete poetry of hip-hop created in a copy-and-paste technique and jazz improvisation. Music thus forms the decisive link in his art. Jean-Michel Basquiat’s Sprechgesang, his music, his sounds and noises continue to resonate in his works; in the words of Glenn O’Brien, ‘the spirits are still playing live,’” explains Dieter Buchhart, guest curator.