Seattle Chapter to Remove ‘Audubon’ from its Name 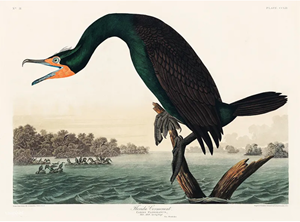 Towards a more inclusive and antiracist future, Seattle’s became the first large chapter in the National Audubon Society network to publicly declare its intention to remove “Audubon” from the organization’s name.

In a move to continue its path toward a more inclusive and antiracist future, Seattle’s became the first large chapter in the National Audubon Society network to publicly declare its intention to remove “Audubon” from the organization’s name.

The relevance of John James Audubon (1785-1851) to a changing country has undergone scrutiny the past few years, coinciding with a national reckoning over race in U.S. history.

Seattle’s Board of Directors unanimously passed the resolution on July 14, 2022, noting the name change will follow a thoughtful and inclusive process. No deadlines or candidates for a replacement name have been established.

The societies named for Audubon were formed after his death. He was known for his paintings and descriptions of U.S. bird species in his seminal work, “The Birds of America.” Less known are Audubon’s history of buying and selling Black people as slaves, his contributions to white-supremacist thought and policy, and opposition to abolition, as well as his appropriation of Black and Indigenous observations of bird species.

“The shameful legacy of the real John James Audubon, not the mythologized version, is antithetical to the mission of this organization and its values,” said Claire Catania, Executive Director of the Seattle chapter. “Our members, volunteers, and staff are focused on a future where the perspectives and contributions of all people are valued—especially those who have been systemically excluded. The challenges facing humans and birds alike demand that we build a radically inclusive coalition to address them.

“Knowing what we now know and hearing from community members how the Audubon name is harmful to our cause, there is no other choice but to change.”

‘We’re here for the birds, for the people, and for nature’

Andrew Schepers, President of the Seattle chapter Board of Directors, said, “This decision is another down payment on our 2020 Strategic Plan commitment toward building a more equitable and just organization. I’m so proud of the leadership of our staff and volunteers in driving this change forward. It will not be easy, but neither is accepting the status quo of continuing to glorify and mythologize a white supremacist.

“We are here for the birds, for the people, and for nature, not to defend a harmful legacy. We’ve got too much good work to do to let this continue to stand in our way. Our organization has a bold history of over a century of activism and impactful conservation. Our work will require all hands and voices to more fully serve our communities today and into the future. Complacency towards antiracism is not an option if we are to fulfill our mission.”

A month before ANS made its decision in 2021, the Dungeness River Nature Center in Sequim, Washington, dropped “Audubon” from its name. However, the change was more to signal an expanded focus on nature beyond just birds and coincided with a major renovation. The Olympic Peninsula Audubon Society will continue to present bird-centric programming to the center, which bore the “Audubon” name starting in 1997.

On July 8, 2021, Seattle, one of the largest independent chapters in the Audubon network, called on the National Audubon Society “to initiate, no later than September 20, 2021, an inclusive and transparent process toward removing John James Audubon from our shared organizational namesake.” The Seattle chapter also affirmed its support to remove eponymous names for birds in the same resolution.

The Seattle chapter plans to soon launch a series of discussions with its internal and external stakeholders about name and mission.