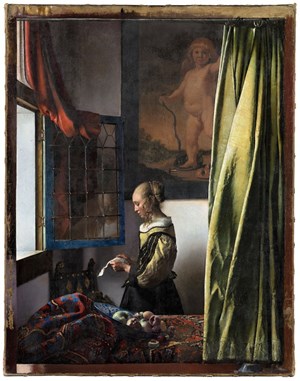 After a full restoration, and for the first time in over two and a half centuries, Johannes Vermeer’s well-known and loved painting ‘Girl Reading a Letter at an Open Window’ has been returned to its original condition when it left the artist’s studio.

After a full restoration, and for the first time in over two and a half centuries, Johannes Vermeer’s well-known and loved painting ‘Girl Reading a Letter at an Open Window’ has been returned to its original condition when it left the artist’s studio. The famous work will be presented to the public as the focal point and highlight of the ‘Johannes Vermeer. On reflection’ exhibition starting on 10 September 2021 in the Gemäldegalerie Alte Meister.

The canvas, painted around 1657-1659, was acquired in Paris in 1742 for the collection of Saxon Prince Elector Friedrich Augustus II, and has been one of the principal works in Dresden’s Gemäldegalerie ever since. An X-ray taken of the painting in 1979 showed that there was a fully overpainted picture-within-a-picture of a nude Cupid that adorned the room’s rear wall in the background. Annaliese Mayer-Meintschel first published this fascinating finding in 1982, and it has been cited in many works on the subject. Since then, academics have assumed that Vermeer rejected the Cupid painting as he was unhappy with the composition, and painted over the room’s rear wall himself. 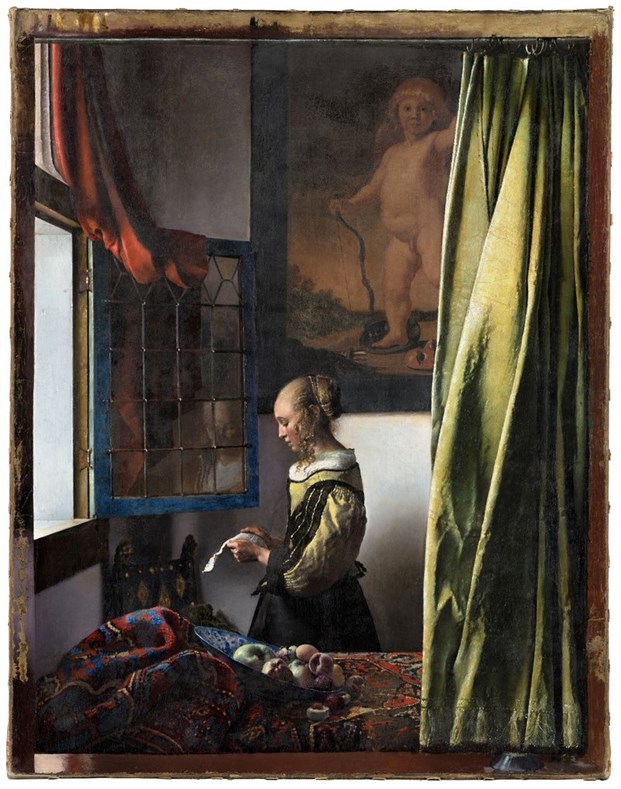 During a restoration and research project that began in 2017 and was supported by a panel of international experts, the team made or re-evaluated X-rays, infrared reflectance spectroscopies and microscopies of the oil painting in the past few years. The backing canvas was also analysed in detail and research was conducted into the painting’s restoration history. Multiple colour samples were taken from Vermeer’s painting and the layers and consistency were analysed in Dresden Academy of Fine Arts’ Laboratory of Archaeometry (HfBK). These studies played a decisive role in reassessing the extensive overpainting of the Cupid figure in the ‘Girl Reading a Letter at an Open Window.’ We can now safely state that it was not Vermeer himself who painted over the background, and that the retrospective change was applied at least several decades after the painting was made, and significantly after the artist’s death. A full-surface X-ray fluorescence scan of the painting, conducted with the support of the Rijksmuseum in 2017, confirmed our new findings on the overpainting.

Given the strong evidence that a third party had painted over the Cupid retroactively, Staatliche Kunstsammlungen Dresden (SKD), endorsed by the panel of experts, made the decision in early 2018 to remove the overpainted layer. Christoph Schölzel, a conservator at the SKD Paintings Conservation Workshop, took on overall responsibility for restoration of the painting.

Following completion of the restoration process in early 2021, the painting now has an entirely new look. A standing Cupid with a bow, arrows and two masks has been revealed in the background, enriching the room’s rear wall as a picture-within-a-picture. The figure is treading on the masks of pretence lying on the ground before him – a sign of sincere love overcoming deception and hypocrisy. The presence of Cupid in the composition is a meaningful ‘comment’ that adds greatly to the painting’s message.

Stephan Koja, Director of the Gemäldegalerie Alte Meister und Skulpturensammlung bis 1800: “It is in ‘Girl Reading a Letter’ that Vermeer discovers his own, distinct style. It marks the beginning of a series of paintings in which individuals, generally women, pause during an activity to find a moment of calm, and to reflect. In this series, Vermeer examines fundamental existential questions, in particular in this piece: Restoring the Cupid in the background shows us the master from Delft’s true intention. Beyond the superficial romantic context, it makes a fundamental statement on the nature of true love. Until now, we could only see this as a fragment. Now we know what a key role it plays in his oeuvre.”

Uta Neidhardt, Head Conservator and Exhibition Curator: “The changed appearance of the ‘Girl Reading a Letter at an Open Window’, including the overpainting removed at the borders of the canvas, gives us an opportunity to reconsider the painting’s composition and how it works visually. The borders appear curiously unfinished – perhaps Vermeer covered it with an actual wooden frame, which is why he left them in such an ‘open’ condition. If we assume that he had planned to use such a construction, we immediately recall the experimental works by church interior painters from Delft, with their trompe-l’oeil curtains, or Pieter de Hooch’s intricate interiors.”

The restored masterpiece will be shown in an historically-accurate ebony frame in the ‘Johannes Vermeer On Reflection’ exhibition from September 10, 2021 until 2 January 2022.