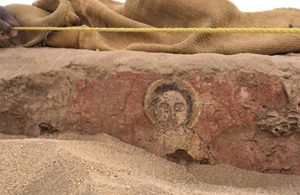 A Team of researchers from Cardinal Stefan Wyszynski University in Warsaw have documented 1,000-year-old paintings in the remains of a church, located South West of the 3rd Cataract on the West Bank of the Nile in Sudan.

The church has a primary nave and two small side naves, constructed from dried mud brick and a lining layer of burnt bricks. Several Greek inscriptions have been identified on some of the surviving walls, while within the sanctuary several paintings have survived despite considerable damage to the structure.

At the time of the initial discovery, the team lacked the conservators and experts to preserve the paintings, so the decision was made to rebury the church ruins in order protect the paintings from the elements.

In the latest study, the researchers found that one of the better-preserved paintings on the eastern wall of the sanctuary shows the bust of Christ Emmanuel against the background of a standing figure, believed to be Icon of ‘Our Lady of the Sign’ showing the Virgin Mary.

Dr. Magdalena Łaptaś who specialises in Nubian iconography at the Institute of Art History at Cardinal Stefan Wyszyński University in Warsaw said: “This type of representation is called Platytera ton uranon (more spacious than the heavens). It means that the womb of the ‘Mother’ is greater than the heavens, containing the unlimited and eternal God. Perhaps the origins of this idea can be found in the pre-Christian vision of the Egyptian goddess Nut, who swallows and gives birth to the sun”.

Flanking this image are two archangels at her sides, both dressed in richly decorated ceremonial attire and shoes embroidered with pearls. The heads of both figures are incomplete, but the researchers believe that they likely depict the archangels Michael and Gabriel.

Łaptaś commented that this type of representation in Nubian art was unknown. “At the same time, it confirms the strong Byzantine influence,” she noted.

The paintings date from between 9th and 11th century AD, a period when the Nubian kingdoms located between the 1st and 6th cataracts on the Nile formed an important Christian cultural centre.