Painting of 18th Century Cricketers at Risk of Leaving the UK 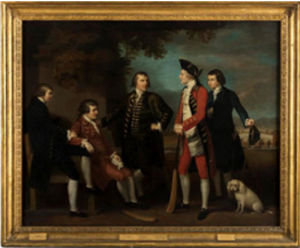 A temporary export bar has been placed on The Cricketers (Ralph Izard & Friends) by Benjamin West, worth £1,215,000.

Export bar is to allow time for a UK gallery or institution to acquire the painting
West is famed for The Death of Nelson and this painting shows the evolution of cricket from a rustic to noble sport during the 1700s
The Cricketers (Ralph Izard & Friends) by Benjamin West is at risk of leaving the country unless a buyer can be found.

The Cricketers shows five wealthy American men playing cricket, possibly at Kew, while visiting the UK to study in the 1700s.

The painting is regarded as one of the most important works depicting early cricket and shows that by the 1750s the sport had evolved from the rustic game played in the 1720s to one taken up by the aristocracy.

West is best known for his work The Death of Nelson which shows the great British naval hero Lord Nelson on the deck of his ship, Victory, at the Battle of Trafalgar.

Cricket is enjoyed by millions of people across the world and this fascinating painting tells the story of the rise of the sport during the 18th century.

It is a wonderful and rare depiction of the early development of one of our most loved games. I hope a buyer comes forward to save the work for the nation so we can give it another innings in the UK.

The Minister’s decision follows the advice of the Reviewing Committee on the Export of Works of Art and Objects of Cultural Interest.

The Committee noted that the painting came at a crucial period of the development of cricket as an elite sport and it was a rare depiction of an early game of cricket. The Committee also suggested that identifying the background to the painting, would be an interesting research avenue and would add to its historical importance.

Together with its interest as a sporting painting, West’s picture is notable for being a rare group portrait of young colonial Americans in England. This kind of work, known as a ‘conversation piece’, was more commonly commissioned by British aristocrats to mark their Grand Tour through Italy. Here, however, the format is repurposed to fit the needs of a group of wealthy American friends who were studying in Britain in the early 1760s.

The Cricketers powerfully demonstrates the extent to which these men were happy to identify themselves with what was often described as the ‘mother country’; some twelve years later, however, their world and their allegiances were to be thrown into flux by the American Revolution. West’s picture, made in his mid-twenties and one of the very first he produced on arriving in London in 1763, also illustrates the developing talents of an artist who was to enjoy great fame later in his career, and who became the second President of the Royal Academy of Arts in 1792.

The Committee made its recommendation on the grounds that the painting is of outstanding significance to the study of Britain’s relationship to America in the 18th century.

The decision on the export licence application for the painting will be deferred for a period ending on 13th April 2023 inclusive. At the end of the first deferral period owners will have a consideration period of 15 business days to consider any offer(s) to purchase the painting at the recommended price of £1,215,000. The second deferral period will commence following the signing of an Option Agreement and will last for three months.